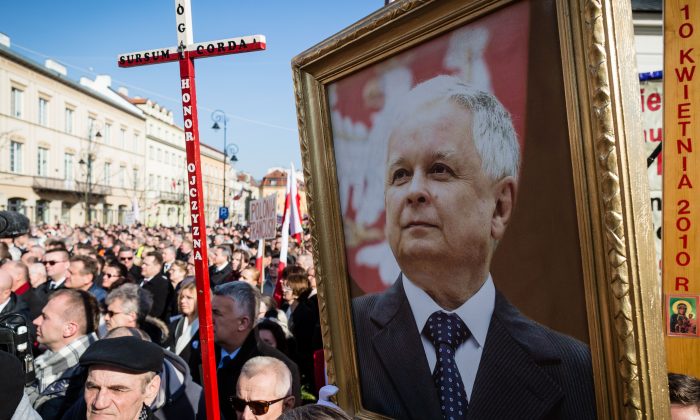 People hold a portrait of former Polish President Lech Kaczynski as they attend a ceremony marking the fifth anniversary of the presidential plane crash in Smolensk, in front of the presidential palace in Warsaw, on April 10, 2015. (Wojtek Radwanski/AFP/Getty Images)
Europe

On April 10, 2010, a Tu-154M aircraft crashed while on approach at the Smolensk airfield, with the death of all 96 passengers including Lech Kaczynski, the president of the Republic of Poland. Among the casualties were also his wife, Maria; his entourage; several dignitaries; and top military commanders.

They were on their way to commemorate some 22,000 Polish officers and intelligentsia systematically massacred by the Soviets in and around the Katyn Forest in 1941.

Almost immediately, Russian authorities blamed pilot incompetency for the crash, pointing out that the left wing of the plane hit a birch tree resulting in loss of control. There was an additional allegation that General Andrzej Blasik, the Polish Air Force commander-in-chief, was under the influence of alcohol and pressured the pilot to land in spite of dangerous, foggy conditions.

The allegation against Blasik was based on a post-mortem assessment of alcohol levels, which was invalid because of biochemical changes that occur in the body after death.

The Polish government at the time handed over the investigation entirely to the Russian Interstate Aviation Committee (MAK). With the purported cause declared at the outset, no objective consideration was given to other possibilities—particularly sabotage.

With the purported cause declared at the outset, no objective consideration was given to other possibilities—particularly sabotage.

Yet airplane parts were strewn over a wide area and many, though not all, bodies were fragmented in a manner inconsistent with a low-level crash resulting from hitting a tree on final approach. Subsequent independent analyses have disproven the incredible birch tree explanation.

Autopsies were carried out in Moscow, together with Polish forensic specialists, according to Poland’s then Minister of Health Ewa Kopacz, a pediatrician. She subsequently retracted this and other related statements.

An important task of forensic specialists is the identification of all bodies and parts thereof. This is done using several different techniques, such as X-rays, photographs, fingerprints, dental records, and DNA. Detailed autopsies are necessary because the analysis of injuries as well as evidence of disease allows investigators to explain many aspects and mechanisms of damage caused in the plane. This protocol was not followed.

The plane’s seats were not examined, proper autopsies were not performed, and the breaking apart of the aircraft was not analyzed.

X-ray scanning of human remains is crucial, especially if an explosion is suspected. Fragments of metal could be found in corpses of those who were sitting in the blast’s center. Biochemical tests for carbon monoxide and cyanide can help determine whether there was a fire on board prior to the crash or whether there were any survivors who inhaled these toxic materials from a fire after the crash. Again, these procedures were not followed, except that biochemical tests for carbon monoxide were done on a few victims.

Some information about explosions can be gained from studying photos of the victims.

These would show typical obvious injuries. Clothing would also have matching evidence of an explosion, such as chemical residues and rips. Confirming evidence should be obtained with X-rays, chemical tests, and so on. Correlation of injuries with the seating location of victims would help determine where the explosives, if any, were placed. Such analyses however, were not done.

Bodies and remains were returned to Poland in sealed coffins with unprecedented instructions that they not be opened.

In a few rare cases where they were opened, families found different bodies than expected and autopsy reports contained gross errors. Cause of death was reported with a lack of professionalism, stating simply that the victims died as a consequence of an air crash.

An “expected behavior” profile of the psychological status of some crew members was done to explain their actions in the cockpit, and the reports described them without even questioning appropriate witnesses. This was done to fit the investigators’ determination to support the chosen explanation of the accident’s cause.

Now, more than five years after the crash, the wreckage has still not been returned to Polish authorities. On the one hand, MAK has released its final report. On the other hand, Russian authorities explain that they are continuing their investigation and that once completed they “may” return the wreckage.

The aircraft’s flight recording boxes remain in Russia. Several copies were made available; however they are not consistent, as some key fragments of taped recordings are distorted or missing.

Some key fragments of taped recordings are distorted or missing.

Why does this situation exist? Why the reluctance to be entirely open and transparent with the investigation? Is there some hidden truth? Was there in fact an explosion that caused the crash as several independent findings suggest?

Why did the leadership of Platforma Obywatelska (Civic Platform), the party in power over the past eight years, leave the investigations to the Russians and not demand complete access to relevant materials? Was it naivety or complicity? These are serious considerations that demand answers.

Earlier this year, the Polish government headed by Premier Ewa Kopacz declared the case closed and even set out to destroy key documents.

With the new government under the leadership of Premier Beata Szydlo, from the newly elected Prawo i Sprawiedliwosc (Law and Justice) Party, there is a chance that increased pressure will be applied to obtain the wreckage and the original black boxes. A proper, unobstructed investigation has yet to be carried out. Whether Russian authorities will comply remains to be seen

Andreas Wielgosz, M.D., Ph.D., is a cardiologist and professor at the University of Ottawa in Canada. François Dubé, M.D., is a retired pathologist and former air crash examiner.