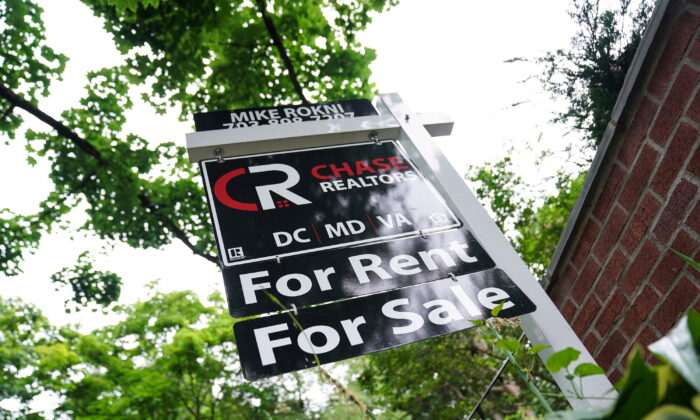 U.S. home sales fell more than expected in July, to their lowest level in six years, due to a rise in mortgage rates and a surge in housing prices, forcing prospective homebuyers out of the market, according to July data from the U.S. Census Bureau.

Despite the slowdown in the housing market, the cost of new homes continued to rise in July, with median prices jumping nearly 9 percent in July from June, to $439,400, while the average sales price was $546,800.

“With the median price of a new home still near this year’s historical high and mortgage rates pushing the cost of borrowing much higher, buyers are finding they hit a financial affordability ceiling.”

Combined with high home prices, the rapid rise in borrowing costs has pushed many new homebuyers out of the market.

Many high-end properties are still available for buyers with cash, but properties lower down the market, which are popular with first-time homebuyers, are becoming more difficult to acquire.

The seasonally adjusted estimate of new houses for sale at the end of July, meanwhile, was 464,000, representing a supply of 10.9 months at the current sales rate.

The collapse of the home sales market, which has been termed by the National Association of Realtors (NAR) as a “housing recession,” is the result of the Federal Reserve hiking interest rates to their highest level in decades in order to bring extremely high inflation under control.

This has led the housing market to rapidly cool down after the central bank’s recent policies led to five months of rising mortgage rates.

Fed policymakers changed their longstanding interest policy in March, with two consecutive hikes of 75 basis points in June and July.

Following the series of rate hikes, the average rate on a 30-year fixed mortgage, the most popular among new homebuyers, climbed to nearly 6 percent in June, but has since moderated, falling to 5.13 percent for the week ended Aug. 18, according to recent data from mortgage lender Freddie Mac.

However, this is significantly higher from a year ago, when 30-year mortgage rates stood at 2.86 percent.

There is some confirmation that the Fed will implement another massive hike in September, which will inflict only further pain on the market.

Mortgage rates moved higher at the start of this week, as the stock market sold off on renewed fears of a recession.

The Fed is holding its annual summer policy symposium in Jackson Hole, Wyoming, on Aug. 26, where the central bank’s chairman, Jerome Powell, is expected to clarify the interest rate posture going forward after weeks of confusion from investors.

About 63,000 home-purchase agreements had been called off in July, equal to 16 percent of homes that went into contract that month, hitting a two-year high as buyers fled the market, according to Redfin last week.

Rising rates have also led the rate of mortgage delinquencies to jump last month, as many homeowners have become increasingly unable to pay off the their loans.

“The national delinquency rate edged up to 2.89 percent in July—driven by a 4 percent increase in early-stage delinquencies—but remains just 14 basis points higher than the record low set in May of this year,” according to Black Knight’s preliminary July report.

Meanwhile, mortgage applications at the end of last week fell 1.2 percent from the week before, continuing the series of declines, according to the Mortgage Bankers Association.

Application volume was 21 percent lower than the same week a year ago.

A housing recession historically has had ripple effects throughout the economy and raises the stakes for a broader recession for 2023 or later.