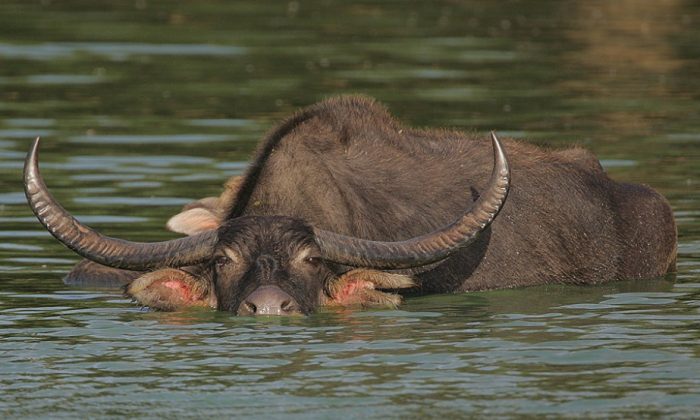 The habitat of wild buffalo is usually tied to the availability of water. This long-horned mammal listed as Endangered by the IUCN. (Steve Garvie/ Wikimedia Commons)
India

The state government declared the Kolamarka forest area as a conservation reserve for this long-horned mammal. The Kolamarka Reserve is spread over 180 square kilometers and is adjacent to the Indravati Tiger Reserve in Chhattisgarh, where around 8–15 genetically pure wild buffaloes have been reported.

The Asiatic wild buffaloes are considered economically significant as they are the direct ancestor of all breeds of domestic buffaloes, but their population has critically decreased.

The International Union for Conservation of Nature (IUCN), has listed water buffalo under endangered category as the remaining world population is under 4,000, with an estimate of fewer than 2,500 mature individuals.

According to IUCN, the most important threats to Wild Water Buffalo are interbreeding with domestic buffalo, hunting, and habitat degradation; while competition for food and water between wild buffalo and domestic stock also makes the situation worst.

In India, this animal is now largely restricted to Assam, Arunachal Pradesh, and Madhya Pradesh. It is crucial that the surviving herd in Kolamarka be preserved and this can only be achieved by declaring this area as a sanctuary and not just a conservation reserve.

As most of the known populations are within protected areas, the small group in Kolamarka reserve can possibly be a hope for the future survival of this extremely endangered ungulate.