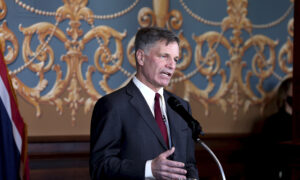 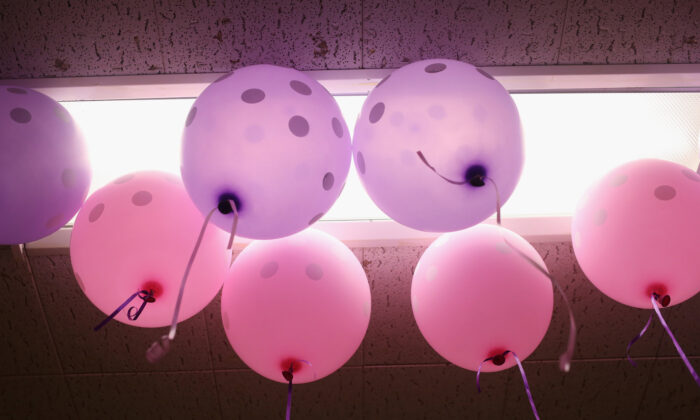 Balloons decorate the venue at a prom in this file photo taken in the Staten Island borough of New York City. (John Moore/Getty Images)
Vaccines & Safety

Students attending a high school prom in New Hampshire were labeled with a number on their hands to show if they are vaccinated or unvaccinated against the CCP (Chinese Communist Party) virus, according to reports.

State Rep. Melissa Litchfield, a Republican who represents the 11th District in Rockingham, wrote in a lengthy statement on social media she is gathering information about what happened during the June 4 prom at the Exeter High School (EHS).

Litchfield also shared some messages from parents that were frustrated and had contacted her to express their concerns about what happened at the event.

“[I] was pretty fired up today after learning that kids who weren’t vaccinated had a number written on them in Sharpie at the EHS prom last night,” one of the constituents who contacted Litchfield wrote.

“If they were on the dance floor they had to raise their hands after every three songs so their numbers could be recorded by other underclass students for contact tracing purposes,” the person added. “There’s even more to the story, but this alone is surprising to us. We truly feel they are literally branding our kids if they don’t get this experiential ’emergency’ approved vaccine…”

Another message Litchfield added shows that a constituent found the actions of school officials “absolutely unbelievable” and compared it to how prisoners were treated in Nazi Germany.

“Marking them, thus singling them out, and then having to raise their hands is beyond tolerable,” the message reads. “First the school could be looking at lawsuits for violation of Hippa rights. They have no business asking for a vaccine card … last Thursday masks were no longer required outside and if this is in effect it should not have mattered if they were vaccinated or not.”

Besides the markings, someone also told Litchfield there was a list—available for everyone to publicly view—that included the first and last name of every student and also showed their vaccination status.

“I found it the next morning,” the person wrote to the state representative. “This information should 1. Not have been shared and 2. Should never be left where anyone can have access to it.”

Photo evidence of the list was also obtained by that person, the message noted.

Reporter Ann Marie Banfield, who first reported the story, said it seems the students were getting exploited because of their age.

“Many parents would never have consented to their children being treated like this,” Banfield wrote. “One parent activist called it bullying. This was a way of bullying the students into getting the vaccine.”

According to the website for the “Exeter High School Senior Prom 2021,” it shows on the main page school officials would use contact tracing, but specific details on how this was going to get implemented were not mentioned.

“Students will social distance during all events at the prom. Because we are allowing students to dance, it is not the expectation that students will social distance while dancing,” the notice reads. “There are three dance floors and students who are on each floor will be recorded at regular intervals. It is suggested that students rotate dance floors in order to avoid close contact with other students. It is essential that students comply with this contact tracing process. Students who do not comply will not be allowed to dance and may be asked to leave the prom early.”