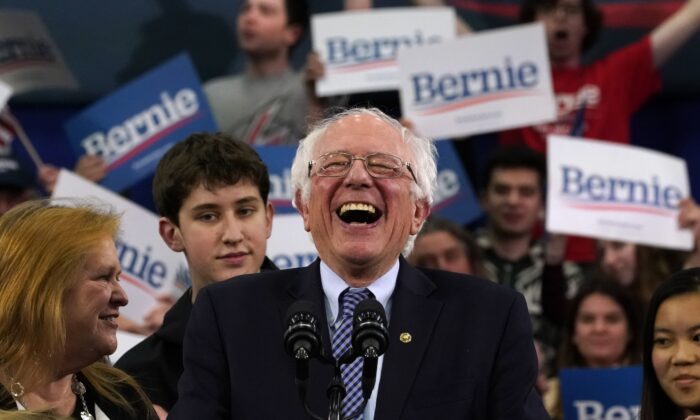 Buttigieg has been a fabricated candidate, roaming around the policy spectrum and running on the novelties of being an overtly gay Army veteran (although he was a pencil-pusher who saw no combat, but at least has worn a military uniform on the job—this, too, is a novelty). He’s a facile and articulate speaker, but he’s like someone acting the role of a candidate and has no natural constituency except semi-moderates; Bloomberg and Klobuchar are more plausible champions for those voters.

In Iowa and New Hampshire, Buttigieg has been a place to park a vote, until either an alternative emerges to the Marxist Sanders and the supreme takeover bidder, Bloomberg (i.e., Klobuchar, given the disintegration of the Biden campaign), or failing that, until the fateful choice has to be made between Sanders and Bloomberg.

The burning question now is whether the non-socialists who don’t want to be bought, like Peter Minuit bought Manhattan Island from Native Americans in 1626, can get behind Klobuchar in sufficient numbers in Nevada so that the Klobuchar campaign can keep ramping up and be a strong contender on Super Tuesday on March 3. That’s when Bloomberg makes his opulent debut in the 15 states that vote that day, led by California and Texas.

The great suspense in the race is whether Bloomberg can open up in close contention for the leadership on Super Tuesday and whether Klobuchar can accelerate fast enough to be a viable alternative to the venerable socialist Sanders and the instant pecuniary deus ex machina Bloomberg.

There are three alternate scenarios. The first is that, as Biden and Warren and the minor candidates fold, Sanders overcomes a lot of centrist reservations and has a lock on 40 percent or more of Super Tuesday voters and is unstoppable.

The second scenario is that Bloomberg’s dispensation of money with manure-spreaders across the country brings him at least even with Sanders, in which case, he should have the momentum to win the nomination.

And the third possibility is that Klobuchar picks up most of the Biden vote and an appreciable share of Warren’s votes, as she did in New Hampshire, as well as some of Buttigieg’s votes and stays within about 5 percent of Sanders as she was in New Hampshire (6 to 7 percent), and becomes the standard-bearer for all those who don’t like Sanders’s unfeasible socialism or Bloomberg’s rather flagrant and cynical acquisitiveness.

Sanders is a hard sell—he’s far to the left of the country; no Congress that could conceivably be elected would enact any of his programs, and four years of chaos would follow his election, in a non-violent Allende-style regime (Salvador Allende was Chile’s communist leader from 1970 to 1973).

On primary night in New Hampshire, he repeated his program of compulsory national medical care, soak-the-rich taxes, forgiveness of a trillion dollars of student loans, free university tuition, and the Full Monty of the Green Terror: scores of trillions of dollars in public spending.

It would be a disaster, but Sanders could benefit from genuine solicitude for his having been, as Donald Trump put it in 2016, “schlonged” and for his quick comeback from a coronary this year.

But most Democrats and the crushing majority of Americans couldn’t stomach Sanders’s Menshevism, and even in New Hampshire, as a neighboring senator, he couldn’t get much past 25 percent.

No one can dispute Bloomberg’s competence, but he’s no great political charmer, and unlike Trump, who started early and campaigned energetically in every primary state in 2016, Bloomberg is substituting money for old-fashioned barnstorming, a formula that hasn’t succeeded in a national campaign. And although Bloomberg purports to regard Trump as a run-of-the-mill billionaire, the president spent very little in support of his campaign in 2016 and still won almost all the primaries—by strenuously campaigning in them.

It’s hard to judge how the desire for a plausible and competent centrist and resentment of an unapologetic moneybag, who announced that the existing candidates being inadequate, he would buy this Democratic nomination, will play out.

Bloomberg has never had to face the blast of a national campaign. New York City is 80 times the size of South Bend, Indiana, but is less representative of the country. No mayor of New York since DeWitt Clinton 200 years ago has gone on to a higher office, even governor, and while the Kennedys and Rockefellers and other wealthy families have splashed their money around, they did so as complements to, and not substitutes for, aggressive campaigning.

There is considerable skepticism among knowledgeable observers about whether Klobuchar can scrabble together the means to campaign effectively in 15 states across the country that will all vote on Super Tuesday in three weeks.

Unless Biden throws his dwindling support entirely to Klobuchar, and she gets endorsements from some of the lesser candidates as they drop off, and a chunk of the party establishment rolls up its sleeves and plunges in to boost her candidacy, Sanders and Bloomberg will likely advance into single combat to the political death between the far left and center left.

Klobuchar has an appeal: a pleasant and unpretentious woman who wears a dress, is never strident, and is always somewhat thoughtful, plucky, and genuine, and occasionally even witty.

She could catch on if she gets some organization under her.

In order to bring this equivocal recitation of the obvious to a worthwhile end, I dare to make a prediction. Sanders got 60 percent in New Hampshire in 2016 against Hillary Clinton, and only 26 percent this week, albeit in an eight-candidate race, and barely squeezed past the notable but ultimately unserious Buttigieg. Sanders is intolerably extreme and, in the end, he won’t fly.

I suspect Bloomberg will make heavy inroads on Super Tuesday and become a very formidable candidate and will, overall, come in close to Sanders, which, given his momentum, will effectively make him the front-runner.

I suspect that Klobuchar will be third overall on March 3, and will attract a powerful shift of support from the party establishment and the less-fervent Sandersites.

Full disclosure: From early on, as soon as I got a good look at the current state of Biden, I’ve thought Klobuchar was the only candidate who could go the distance to the nomination. Under any scenario, President Trump will be reelected and not by a narrow margin.

Conrad Black has been one of Canada’s most prominent financiers for 40 years and was one of the leading newspaper publishers in the world. He is the author of authoritative biographies of Franklin D. Roosevelt and Richard Nixon, and, most recently, “Donald J. Trump: A President Like No Other.”