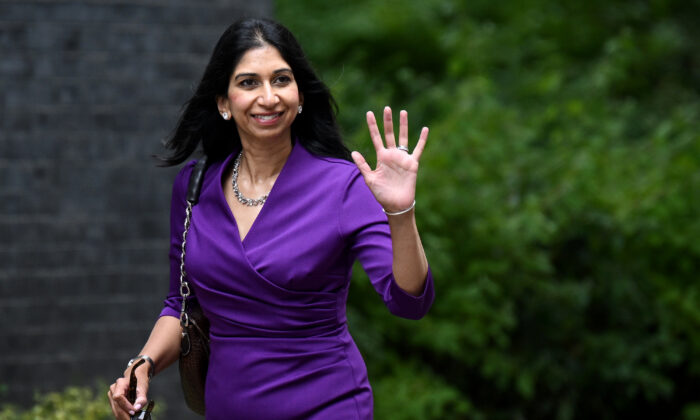 The British government’s top legal advisor says she will issue new guidance to prevent schools from practicing what she called “anti-Western” gender dogma.

“Anti-Western pseudo-scientists have spawned a new category in which our characteristics form a hierarchy of oppression,” Attorney General Suella Braverman said in a speech today.

Braverman said that the rise in transgenderism in recent years—which has no prior history—suggests that something is going on other than gender self-expression.

“Schools are indoctrinating children into a one-sided controversial view,” Braverman said in a speech to the Policy Exchange, a think tank, on Aug. 10, 2022.

Braverman called on parents to fight back against the teaching of gender identity theory in schools.

“No child should be made to feel disadvantaged for questioning what they are taught.”

Braverman set out the process by which the Equality Act must be upheld.

Braverman explained The Department for Education is in the process of issuing detailed and practical guidance which will set out the framework under which schools must operate.

“I am setting out the legal breach for them [The Department for Education],” Braverman said.

“That guidance must be applied and it must be clear and when it is not being applied OFSTED must step in.”

OFSTED is the government body that inspects schools to make sure that they are meeting standards and providing a good quality of education.

Braverman set out a series of matters that are permitted under the Equality Act.

“Yes, it is lawful for a single-sex school to refuse to admit a child of the opposite biological sex,” she said.

“Yes, it is lawful for a mixed school to refuse to allow a biologically and legally male child” from using the girl’s toilet she said. “If the school did allow a trans-girl to use the girl’s toilet, this might be unlawful indirect discrimination against the female children.”

In Britain, the conservative government does not recognise gender self-identification. And under-18s are unable to obtain a gender recognition certificate.

It is wrong for schools to suggest they have a legal obligation which means they must address children by their preferred pronouns or names, she said.

Braverman has been the attorney-general for England and Wales since 2020. She sits in the cabinet but is not a part of it. Scotland has a separate legal system. Northern Ireland comes under the remit of England and Wales.

Braverman was the first person to put her name forward as a candidate for leadership of the Conservative Party.

She was knocked out of the leadership race early, but she has urged her supporters to back Liz Truss especially on the issue on identity politics.

“Liz has been very forthright and commonsensical when it comes to identity politics, that’s why I am supporting her,” Braverman told GB News.

Forstater got clarification from Braverman that school leaders and local councils who have already adopted the gender ideology will have to abide by the new guidance.