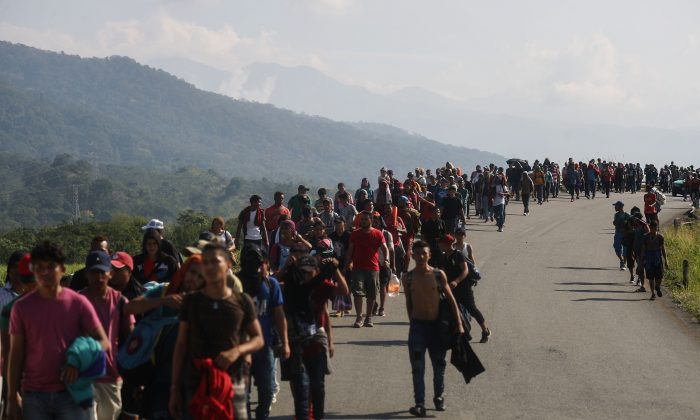 Central American caravan migrants walk along a roadside in Huixtla, Mexico, on their way to the United States on Jan. 20, 2019. (Mario Tama/Getty Images)
US News

New Group of Almost 400 Migrants Arrives South of US Border

A group of about 400 mostly Central American migrants has arrived via train in Mexicali, Mexico—across the border from Calexico, California—and has been transported by buses to local shelters, Mexican media reported.

The group, which arrived March 6, is made up of 223 men, 96 women, and 38 children, many of whom are unaccompanied minors. Most of them are planning to go west to Tijuana, although resources there are so scarce that only 200 more people can be accommodated, said Gustavo Magallanes Cortés, the director of migrant affairs for Mexico’s Migrant Care government program.

While the Mexican government hasn’t provided resources to take care of the migrants, the National Institute of Migration, a federal agency, provided bus transportation to two shelters in the city, Francisco Vega, the governor of Baja California, said in an interview with La Cronica.

The Hijo Pródigo shelter is expecting to run out of food in three days, shelter manager Mario Nuñez said.

The new group caught up with the roughly 200 other migrants who arrived in the border city earlier in the week. So far, there are about 800 migrants in Mexicali; a total of 1,000 were expected by the end of the week, according to reports.

Some migrants said they want to submit themselves to the United States and ask for help, because they either know people in the United States or have family that will receive them, Araceli Aviles, the manager at Alfa y Omega shelter in Mexicali, said.

Cortés said the group was accompanied by open-borders organization Pueblo Sin Fronteras (People Without Borders), who he said has been helping the migrants make decisions about their travels, according to Zeta Tijuana.

Sanchez Cordero implied that some who promote caravans may be involved in human smuggling. She also said the new Mexican government under President Andrés Manuel López Obrador is seeking to have a safe border and break down the “huge business” of human smuggling by regulating immigration in the country.

“We want to regulate immigration in our nation, I believe this is a sovereign right of Mexico to have organized migration,” she said.

This fiscal year, Border Patrol has apprehended almost 268,000 people at the southwest border, including more than 66,000 in February, according to Customs and Border Protection data. In January, the number was 48,000. The numbers are on target to surpass 640,000 for the fiscal year.

President Donald Trump has continued to speak about the importance of the border wall, now in the process of construction, to help end the crisis of illegal border crossings that has been worsened by the migrant caravans.

“We are apprehending record numbers of illegal immigrants—but we need the Wall to help our great Border Patrol Agents!” he said in a tweet on March 8.

The United States pledged $10.6 billion, while Mexico said it would contribute $25 billion to develop southern Mexico over the next five years.