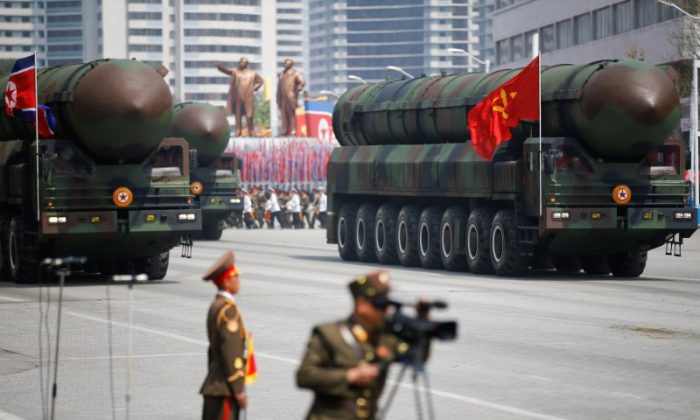 New ‘Great Game’ in Play on the Korean Peninsula

Historically, the “Great Game” was played both diplomatically and militarily as Great Britain maneuvered against Czarist Russia to thwart Moscow’s presence (and promote Britain’s domination) in South Asia.

Today we have the classic struggle in Northeast Asia—the “quadrilateral interface” with China, Russia, Japan, North and South Korea, and the United States seeking security objectives that on their professed faces appear incompatible. To wit:

Seoul would probably most prefer to be left alone to enjoy ever greater prosperity and international prestige. While it would be politically satisfying to terminate the Korean War officially (status still an “armistice”) and unite the peninsula under a democratic government, no one would welcome resumed war, regardless of the outcome.

But Seoul is also suffering instability as its first female president, Park Geun-hye, was impeached, removed from office, and now indicted on bribery/extortion/corruption charges. A special presidential election May 9 could result in more Pyongyang-friendly leadership.

While Chinese president Xi and other senior Beijing officials appear frustrated by the erratic actions of Pyongyang’ leader Kim Yong-un, they are still reluctant to implement regime change.

Moscow has opted out. No longer a significant player in the Far East, Moscow has focused on rebuilding influence/control over Eastern Europe/Central Asia and expanding influence into the Middle East (Syria/Iran). It did, however, demand a Security a Council resolution including “diplomatic” resolution of Pyongyang’s sanction violations.

Washington for decades was the one player that could have walked away. Instead, it has bound itself to Tokyo and Seoul with nuclear guarantees against resumed attack from Pyongyang and Beijing expansionism. For over 20 years, Washington and allies stressed economic carrots and politico-economic sanctions to stop Pyongyang’s nuclear program. Efforts proved feckless. Washington has now announced that negotiations have failed and the period of “strategic patience” has ended.

But Pyongyang’s once risible rhetoric now has nuclear teeth—fangs that promise to become longer, larger, and sharper.

Pyongyang has just completed a massive celebration, featuring a wide array of ballistic missiles (including possible ICBM variants), to commemorate Kim Il-sung’s 105th birthday. It followed the celebration with a missile launch, which embarrassingly failed, but did not attempt a much-bruited-about nuclear test.

Following President Trump’s meeting with Chinese President Xi, there appears to be a tentative agreement that Beijing will intervene on Pyongyang’s nuclear program. Such could be the rationale prompting Pyongyang’s non-test of another nuclear weapon. Beijing has already suspended import of North Korean coal—and threatened to suspend oil supplies.

In complementary fashion, Secretary of State Tillerson and Vice-President Pence have issued repeated warnings against Pyongyang’s “reckless” behavior. U.S. and South Korean forces are conducting large (but prescheduled) military exercises. Pyongyang has declared (ritualistically) they are invasion precursors—and heightened the intensity of its countervailing rhetoric.

Washington appears to have concluded that it cannot live with Pyongyang’s nuclear missile program. Multiple previous efforts to dissuade Pyongyang from continuing it have failed—and Washington has rejected the “Israeli solution” of kinetic action against nuclear programs of hostile states.  Pyongyang appears to believe viscerally that states eliminating nuclear programs, e.g., Iraq and Libya, are overthrown by Western forces. Some options:

Recalling the old auto maintenance advertisement, “You can pay me now or pay me later.” We didn’t pay early; paying now will be more expensive.