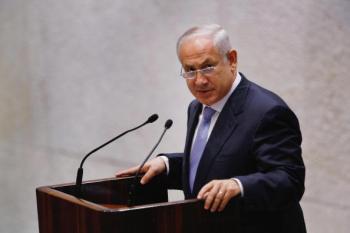 Israeli Prime Minister-Designate Benjamin Netanyahu said he was willing to talk peace with the Palestinians as he presented his cabinet for parliamentary approval amid international concern Israel's new government could bury the negotiations. (David Silverman/AFP/Getty Images)
Middle East

By Ben Kaminsky
biggersmaller
Print
Israeli Prime Minister Benjamin Netanyahu and the 32nd Israeli government were sworn in on March 31. After long and difficult negotiations for forming a coalition, the government will have 30 ministers of five different parties, and seven deputy ministers, which will make the largest Israeli government ever.

The new prime minister talked in his speech about two major difficulties facing his government: the economic crisis and the security challenge, and added that peace with Palestinians is achievable.

Netanyahu is Israel's prime minister for the second time in 10 years. Avigdor Liberman of the nationalist Israel Beyteinu Party is the new foreign minister. Head of the Labor Party, Ehud Barak, will continue to serve as security minister.

“Israel is aspiring to achieve full peace with all the Arab and Muslim world,” he said. “This aspiration is backed with a common interest of Israel and the Arab countries facing the fanatic surge that is threatening all of us.”

Regarding the peace process with the Palestinians, he said: “During the last two decades, six prime ministers in Israel were not able to achieve peace, and it is not their fault. I am saying to the leadership of the Palestinian Authority: if you really want peace, peace is achievable.”

“We do not want to control the Palestinians,” he said. “They will have all the authority to rule themselves, except for those who will threaten Israel’s security.”

Netanyahu’s speech was often interrupted by Knesset Members expressing their discontent of the new Netanyahu government.

With thirty ministers and seven deputy ministers, this will be the largest and most expensive government in Israel’s history. Since Netanyahu wanted to form a large and stable coalition, he had to agree to the different parties’ demands.

Some of the new ministers agree that this is a major problem, but blame the system of elections and governance for forcing them into this situation. Some said that expensive as this government might be, it is still not as expensive as holding elections again.

But former foreign minister and new head of opposition Tsipi Livni has strongly criticized the current situation and personally criticized Netanyahu, as well as the coalition agreements, which she described as having “nothing to do with the interest of the country.” She said that Netanyahu has betrayed his own economic experience by signing these agreements. She also criticized the Labor Party for joining the government.

“Do not blame the system, we are the ones who determine things,” she said.