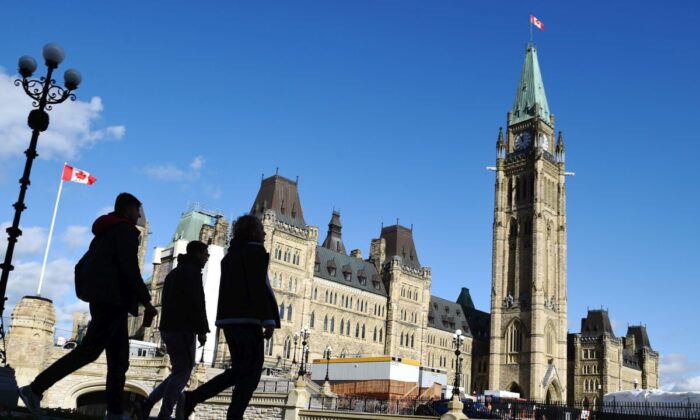 The federal government’s new gender pay equity law will have the opposite effect and actually hurt the real interests of female workers, a scholar says.

The Pay Equity Act, which came into effect on Aug. 31, mandates federally regulated employers with 10 or more workers to come up with a pay equity plan within three years.

Labour Minister Filomena Tassi said the act, which received royal assent in December 2018, means women will be paid equally for work of equal value and is a “significant step forward towards reducing the gender wage gap.” According to Statistics Canada, for every dollar earned by a man, a woman earns 89 cents.

Matthew Lau, whose research includes fiscal policies and employment regulations, has a different take on it. He told The Epoch Times that the pay equity law will have the effect of increasing the costs of hiring women for federally regulated employers—which include the federal public service and federally regulated private companies.

“For example, the business would need to use resources to prove to the federal government that their female employees are not underpaid relative to men,” said Lau, an adjunct scholar at the Fraser Institute and fellow with the Montreal Economic Institute.

“Since the increased costs to employers come without any compensating benefit, the effect would be to discourage those employers from hiring women.”

Lau argues in a recent article that the “decades-old fallacy of the benefits of government regulation in protecting workers still persists.” He refers to a public lecture given by acclaimed economist Milton Friedman at the University of Chicago in 1977, where Friedman advocated restoring the free market in the United States as the greatest defence against becoming over-governed. During the Q&A session, a female audience member challenged him on his opposition to gender pay equity laws.

Friedman responded that “the actual effect of requiring pay for equal work will be to harm women.”

He explained that “if women’s skills are higher than men’s in a particular job or are recognized to be higher, the law does no good, because then they will be able to compete away [anyway] and can get the same income.”

And “if their skills are less for whatever reason … and you say the only way you are able to hire them is by paying the same wage, then you are denying them the only weapon they have to fight with,” he said, referring to the weapon of competition.

Such laws also make it easier and cheaper for employers who are sexist to discriminate against women, Friedman added.

“If you say to them, you have to pay the same wage no matter whether you hire women or men, and here is Mr. sexist pig—it doesn’t cost him anything to hire men instead of women,” he said, noting that what you actually want is “to make it costly to him to exercise his prejudice.”

“When you try to get equal-pay-for-equal-work laws, what you are doing is reducing to zero the cost imposed on people who are discriminating for irrelevant reasons,” said Friedman.

Under the Pay Equity Act, which will be phased in over the next three years, failure to comply would mean a $30,000 fine for employers with up to 99 staff and a $50,000 fine for larger companies.

The law will also make it more costly to hire a woman than to hire a man when both are equally competent and demand the same salary, due to its requirements to provide free women’s sanitary products, Lau said.

Tassi said in late July that the government has consulted with experts about providing free sanitary products to female employees in the workplace, and that it’s committed to moving forward after speaking with labour and employer groups over the summer and fall.

The government first outlined the proposal in May 2019, but it wasn’t until last October that labour officials decided to re-examine the issue after the government was presented with a petition.

Lau said the policy will achieve the opposite result, similar to gender pay equity laws, as it would increase the costs of hiring women, thus effectively discouraging employers from doing so.

“In the long run, whatever benefits women get in terms of free hygiene products would be more than offset by the reduced willingness of federally regulated employers to provide them with jobs,” he said.

A briefing to Tassi by labour officials estimated it would cost federally regulated employers over $1 million to provide free hygiene products, based on an annual per-employee cost of almost $60 and assuming a 50 percent take-up rate.

A 100 per cent take-up rate would put the cost closer to $2.3 million annually.

Lau argues that a competitive labour market can better protect employees from exploitation in the workplace than government regulation can.

“In a competitive market, employees who are not paid what they are worth can walk out the door to a competing firm. As long as the compensation workers demand does not exceed their productive output, competing firms would find it profitable to hire them,” he said.

“There is widespread agreement among economists that competition is effective in protecting workers from being exploited or underpaid by employers.”