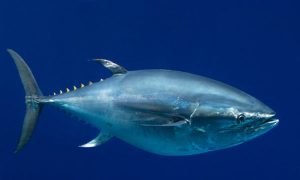 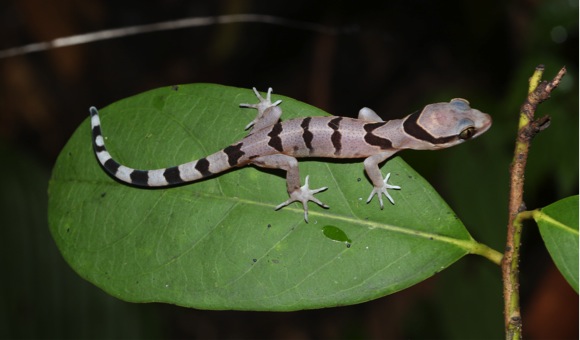 A research team based in western Thailand has discovered a new gecko species in the Kanchanaburi Province, a region renowned for its number of species found nowhere else in the world. A recent publication in the journal Zootaxa describes the Sai Yok bent-toed gecko (Cyrtodactylus saiyok), likely the sixth reptile species endemic to the region known to science.

“No other area of Thailand houses as many reptile endemics,” coauthor Dr. Oliver S. G. Pauwels, a tropical reptile specialist who has described four of these endemics, told mongabay.com.

The site at which the species was first identified consists of a limestone hill covered in dry evergreen and bamboo forest. Named for the district in which it was discovered, the Sai Yok bent-toed gecko was found exclusively on small trees, stumps, and plants in the Araceae family, which includes rhododendrons. It is pale brownish gray over much of its body, with bluish pigment surrounding its eyes and dark bands encircling its tail and body. It’s quite small, with a maximum length of just over six centimeters (2.4 inches). Because surveys yielded both a juvenile and a pregnant female, the researchers suspect the species reproduces year-round.

The main identifying trait that distinguishes the Sai Yok bent-toed gecko from other Cyrtodactylus species lies in the presence of its enlarged thigh scales. Other characteristic features include enlarged scales on the underside of its tail, distinct back patterns and toe pad traction structures, and number of pores in front of its cloaca. The “pattern and small size [of C. saiyok] do not put it close to any known relatives,” Pauwels explained, offering reason for further genetic study in the future.

The Sai Yok bent-toed gecko serves as a reminder of the region’s potential as a refuge for species not yet described by science. As Pauwels suggests, “it would not be surprising [if] several dozens of reptile species remain to be discovered in each Southeast Asian country, particularly among geckos and other small lizards.”

Still, encountering a new organism is merely the beginning of an arduous verification process. Confirmation of a previously undiscovered species demands years of focused research and requires extensive knowledge of local species within the same genus. Scientists must thoroughly examine existing studies, museum specimens, and live organisms to figure out whether or not a population of animals is, in fact, a new species.

Despite the advantages of genetics, Pauwels stands by his belief that “genetic studies are not indispensable for describing new species.” Systematics, taxonomy, and morphology remain relevant and play important roles in determining species status.

The Kanchanaburi Province contains an especially high level of endemism and provides habitat to a variety of colorful reptile species such as the yellow-headed rock gecko (Cnemaspis huaseesom), the tiger bent-toed gecko (Cyrtodactylus tigroides), the orange-tailed ground gecko (Dixonius hangseesom), Nutaphand’s red-eyed gecko (Gekko nutaphandi), and the Kanburi pit viper (Trimeresurus kanburiensis). “Why the [Kanchanaburi Province] houses so many unique species is a complete mystery,” Pauwels said, who was drawn to the region by this remarkable diversity.

Scientists have yet to uncover any outstanding “geographical or environmental features” that might explain the Sai Yok District’s high endemism. To Pauwels, the discovery of the Sai Yok bent-toed gecko will “certainly draw the attention of the scientific community to this locality,” and help shed light on its mysteries.

This article was originally written and published by Joanna Parkman, a contributing writer for news.mongabay.com. For the original article and more information, please click HERE.