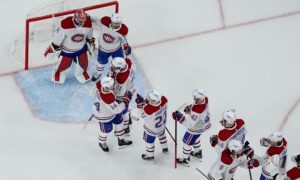 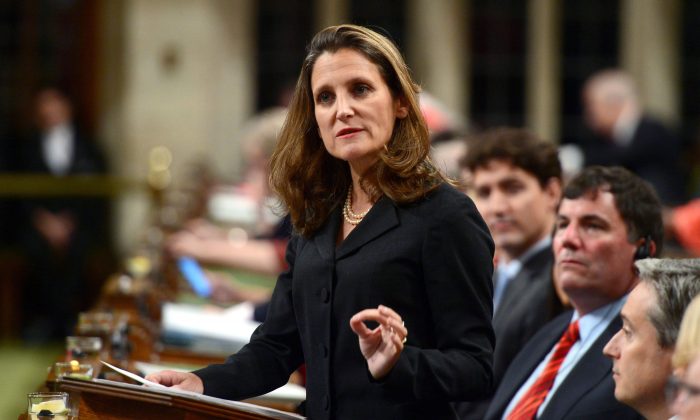 Minister of Foreign Affairs Chrystia Freeland delivers a speech in the House of Commons on Canada's new foreign policy on June 6, 2017. (The Canadian Press/Sean Kilpatrick)
Canada

It is important now more than ever for Canada to plot its own course in the world, the foreign affairs minister says
By The Canadian Press
biggersmaller
Print

In a major foreign policy speech in the House of Commons on June 6, Freeland didn’t mention Donald Trump by name, but made an unabashed pitch for the international rules-based order that the U.S. president’s America First policy is attacking.

The speech came on the eve of the release of the government’s defence policy review, in which Defence Minister Harjit Sajjan made the case for billions in new military spending as he unveiled the government’s long-awaited vision for expanding the Canadian Armed Forces.

“Principled use of force, together with our allies and governed by international law, is a part of our history and must be a part of our future.”

Finance Minister Bill Morneau hinted in an interview that future defence budgets could become noticeably fatter after his department spent “a huge amount of time” working on the defence review.

To rely solely on the U.S. security umbrella would make us a client state.
— Foreign Affairs Minister Chrystia Freeland

“What minister Freeland was saying is that we recognize the importance of our commitment to our military,” Morneau said.

“We understand the nature of the challenges that we’re facing right now with terrorism and broader public safety issues, so as we put forward our investments, that’s the context.”

Freeland said Canada doesn’t need an inward-looking “Canada First” foreign policy, but given that the United States is now questioning the worth of its global leadership, it is more important than ever for Canada to plot its own course in the world.

Her emphasis on hard military power is a tougher expression of the country’s international interests than Canadians are used to hearing. In the 1990s, her Liberal predecessor, Lloyd Axworthy championed a “soft power” agenda that focused on protecting civilians in armed conflict at a time when the government of the day was cutting defence spending.

“The accent on hard power is interesting,” said Fen Hampson, head of the global security program at the Centre for International Governance Innovation. “The Liberals have traditionally been soft power champions and she is saying that Canada needs both.”

Freeland said that notwithstanding the “incredibly good relationship” with the United States, Canada cannot simply depend on American military protection.

“To rely solely on the U.S. security umbrella would make us a client state,” she said. “Such a dependence would not be in Canada’s interest.”

She said Canada played a major role in shaping the global order after the Second World War because the country—including her own family—suffered heavy losses in two world wars. The United States has been an indispensable nation in leading the world since then, she said, but that is changing and Canada has to adapt.

She also addressed the protectionism—again without mentioning Trump by name—that has taken root in the United States and elsewhere, suggesting that stance is on the wrong side of history.

“Beggar-thy-neighbour policies hit middle powers soonest and hardest,” she said. “This is the implacable lesson of the 1930s and the Great Depression.”

Freeland said after the speech that she had spoken with U.S. Secretary of State Rex Tillerson the previous day to explain the context of her remarks about his country.

Paul Heinbecker, Canada’s U.N. ambassador when the United States invaded Iraq in 2003, said Freeland’s speech contained enough complimentary reminders about the sacrifices of the United States as a world leader to placate the Americans.

Even so, recent history has shown Canada has the ability to disagree with the United States, he said.

Heinbecker said he advised the Liberal government to stay out of the Iraq campaign, “and there were some people in Ottawa who said, ‘Oh my, we can’t disagree with Washington on something as important as a war.’

“It turned out not only could you, we did. And there were no consequences, virtually.”

From The Canadian Press, with files from Andy Blatchford