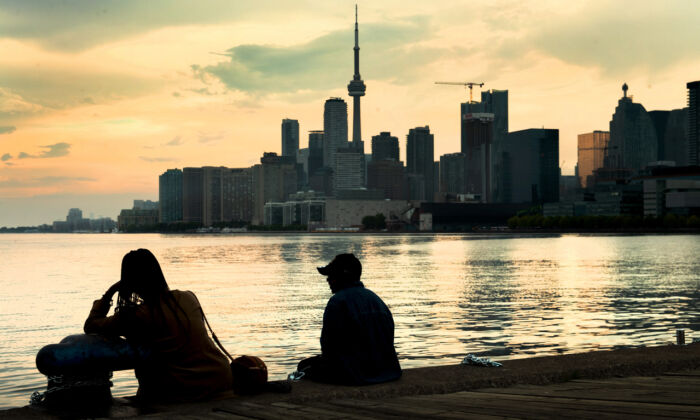 Two people sit and watch storm clouds passing by the skyline in Toronto on June 8, 2021. (The Canadian Press/Frank Gunn)
Canada

The commission responsible for redrawing Ontario’s federal electoral map is proposing an overhaul to account for changes in where people live.

Under the proposal, Toronto and northern Ontario would lose one riding each, with new districts created in the eastern and northern Greater Toronto Area, central Ontario, along with the Guelph and Brampton areas.

The Constitution calls for a review of electoral boundaries after each 10-year census, and a new federal law requires that each province keep at least the number of MPs it had in 2019.

That change will mean Quebec returns to having 78 MPs, rather than the current 77 when the boundaries are redrawn.

The soonest the new maps could be in place for a general election is 2024.

Ontario’s boundaries commission is taking into account data from the 2021 census as it tries to address overrepresentation in some areas—such as Toronto—and under-representation in others, including Durham, Dufferin and Caledon.

Population growth in the city of Toronto was lower from 2011 to 2021 than in the rest of Ontario, and there are now disparities in population density and riding size, the commission says.

It has also taken into account the number of Indigenous, francophone, and rural and urban communities to ensure representation in the House of Commons is not diminished.

In the northern part of the province, where growth has been modest over the last decade, the new map would create one “extraordinary circumstances” district in order to preserve a riding in a remote area with a number of Indigenous communities.

The district would be more than 520,000 square kilometres, though the commission noted there are larger ridings elsewhere in the country.

The commission will now hold public hearings and collect feedback on the proposed 122-district map.

Proposed maps have already been produced in every other province, where public feedback has started. The territories, which have one seat each, will not see any changes.