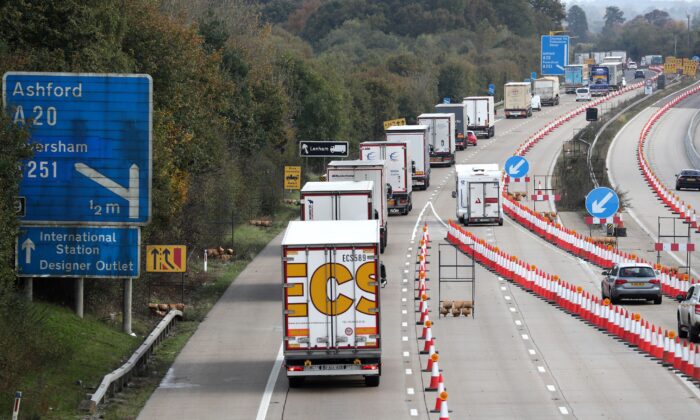 New EU border identity checks could result in a 17-mile tailback at the port of Dover, a representative of the UK logistics industry has told a parliamentary committee.

The EU is scheduled to implement a new system in April 2022 to monitor non-EU travellers entering the bloc’s Schengen Area. It is proposed that UK citizens embarking on cross-Channel trips from Dover will be checked by French police at the Kent port.

Elizabeth de Jong, director of policy at trade body Logistics UK, said it would be “very bad news” if lorry drivers are required to leave their vehicles to undergo biometric checks.

Forcing drivers to leave their vehicles “takes up a lot of time and also leads to security issues,” she said, adding, “An increase in two minutes processing for each lorry would lead to a 17-mile delay at the Dover border.”

Giving evidence to the Transport Select Committee of the House of Commons, de Jong said she hopes that “pragmatic negotiations” could take place that result in lorry drivers being able to stay in their cabs.

MPs were also warned that there will be a reduced range of food items available to buy this Christmas due to supply chain issues.

Shane Brennan, chief executive of the Cold Chain Federation, a trade body representing the temperature-controlled logistics industry, said the sector is focused on what it believes is “achievable” in terms of what can be delivered to stores.

“It’s not about shortages, it’s about simplifying,” he told the committee. “Having less range obviously is one of the key decisions you can make in trying to make supply chains more efficient.”

“We are very good at piling high and selling cheap at Christmas time. What we have to do is strategically scale that back in order to meet the promise that there will be the stuff you expect to see on the shelves, but not necessarily all the extras.”

The supply chain is facing a number of pressures, such as drivers leaving the industry and difficulties recruiting new ones, border issues, and delays with the movement of shipping containers.

Global shipping supplies are in “an unprecedented period of stress,” Brennan told the committee.

He said it is taking two or three days for fresh food arriving at UK ports to be delivered to stores, whereas this would normally happen on a same-day or next-day basis. For frozen food, the timescale has increased from between one and three days to up to five and six days.