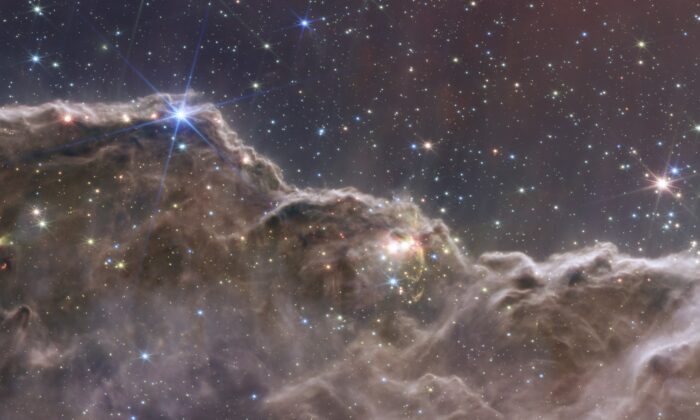 This image released by NASA on July 12, 2022, combined the capabilities of the James Webb Space Telescope's two cameras to create a never-before-seen view of a star-forming region in the Carina Nebula. (NASA, ESA, CSA, STScI via AP)
Space

Astronomers and scientists around the world have been reacting to newly released images from NASA’s James Webb Space Telescope, with one declaring a “new era in space exploration.”

The pictures reveal the splendors of the universe, from baby stars to far off galaxies.

The unveiling from the $10 billion James Webb Space Telescope began on Monday at the White House with a sneak peek of the first shot—a jumble of distant galaxies that went deeper into the cosmos than humanity had ever seen.

Michael Messina, an assistant professor of astronomy at the University of Wisconsin-Madison and a contributor to the Webb project, says they “weren’t even trying that hard”.

“This image was actually pretty short, in terms of its duration. And we hope over the course of the mission to take even longer, even deeper pictures, to find things that are even further away,” he says.

Tuesday’s releases showed parts of the universe that have been seen by other telescopes.

But Webb’s sheer power, distant location from Earth, and use of the infrared light spectrum showed them in a new light that scientists said was almost as much art as science.

With Webb, scientists hope to glimpse light from the first stars and galaxies that formed 13.7 billion years ago.

The telescope will also scan the atmospheres of alien worlds for possible signs of life.

Webb used its infrared detectors to look at the chemical composition of a giant planet called WASP-96b—it’s about the size of Saturn and is 1,150 light-years away.

It showed water vapor in the super-hot planet’s atmosphere and even found the chemical spectrum of neon, showing clouds where astronomers thought there were none.

“With the new James Webb Space Telescope, we can start to determine the composition of atmospheres of some of these exoplanets,” explains Jason Rabinovitch, an assistant professor at Stevens Institute of Technology.

“So, now we can start to really determine if we think those exoplanets are Earth-like, or if they’re Jupiter-like or if they’re Venus-like and things like that.”

Scientists say Webb’s use of the infrared light spectrum allows the telescope to see through the cosmic dust and see faraway light from the corners of the universe.

“They’re really, really magnificent. What’s amazing about these images is what they show and show us what Webb will be able to do,” says Catherine Pilachowski, a distinguished professor at Indiana University.

Some of the Hubble telescope’s most stunning images have been shots of the Carina Nebula, one of the bright stellar nurseries in the sky, about 7,600 light-years away.

Webb project scientist Klaus Pontoppidan decided to focus one of Webb’s early gazes on that location because he knew it would be the frameable beauty shot.

The result was an image of a colorful landscape of bubbles and cavities where stars were being born.

“These images represent a new era in space exploration,” says Danny Milisavljevic, an assistant professor at Purdue University’s Department of Physics and Astronomy.

“The large size of Webb, combined with its sensitivity to longer wavelengths in the mid-infrared mean that it will be able to probe regions of the universe that we’ve been never able to access before and will be able to conduct research into nearby systems in ways that we before only dreamed of doing.”

The world’s biggest and most powerful space telescope rocketed away last December from French Guiana in South America.

It reached its lookout point 1 million miles (1.6 million kilometers) from Earth in January.

Then the lengthy process began to align the mirrors, get the infrared detectors cold enough to operate, and calibrate the science instruments, all protected by a sunshade the size of a tennis court.