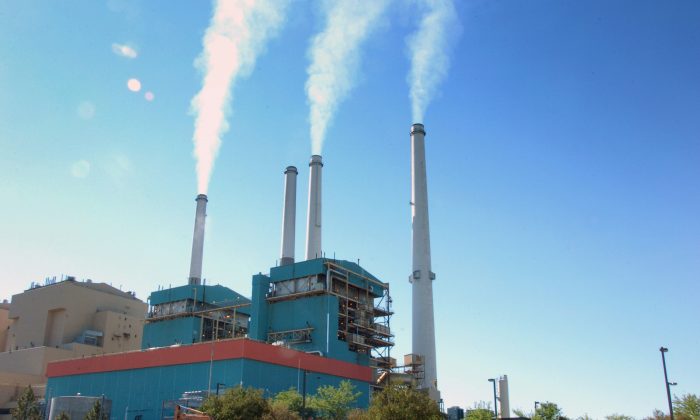 Smoke rises from the Colstrip Steam Electric Station, a coal burning power plant in in Colstrip, Mont., on July 1, 2013. (AP Photo/Matthew Brown)
US

Power plants have a new set of environmental rules to worry about, this time cracking down not on air pollution, but on the amount of toxic chemicals the plants can dump into waterways.

The new rules announced in September will be published in the Nov. 3 edition of the Federal Register and go into effect 60 days later.

The Environmental Protection Agency (EPA) has updated the rules—known as the Steam Electric Power Generating Effluent Guidelines—for the first time since 1982, and estimates the change would keep 1.4 billion pounds of toxic chemicals and other pollutants out of waterways each year.

The agency expects less than half of coal-fired power plants will be affected by the rule, the ones that don’t have the right technology in place yet, and about 12 percent of steam electric power plants will incur some costs.

Steam electric power plants are the largest toxic pollutant contributors to surface waters out of all the industrial categories regulated under the Clean Water Act. Currently, about 23,600 miles of rivers and streams are affected by toxic discharges. Power plants get rid of 79,200 pounds of arsenic, 65,000 pounds of lead, and 3,000 pounds of mercury each year, the agency said.

Although the crackdown is in line with other recent measures by the EPA to limit polluting emissions from power plants, the rule had stayed dormant for nearly 30 years until environmental groups sued the EPA in 2010 to take action (Defenders of Wildlife v. EPA).

The Clean Water Act requires the EPA to publish a final Effluent Guidelines Program Plan every two years, but the plan only makes revisions, if deemed necessary. So, for years the EPA simply set up a schedule for the review of the existing rules, which include industrial water discharges across a number of categories (one of which is steam electric power generation).

In the lawsuit, environmental groups complained the EPA had not fulfilled its duty to keep the rules up to date with advances in power generation technologies and emerging new waste streams. When the proposed rule rolled out in June 2013, they still weren’t happy, claiming it was too “watered down,” according to water industry website Industrial WaterWorld (IW).

Environmental groups filed a Freedom of Information Act lawsuit against the White House, said IW, claiming the administration withheld documents that would indicate it weakened the EPA’s proposal.

Gary Broadbent, a spokesman for Murray Energy said via email that the new rule will cost billions of dollars to implement and likely force the shutdown of productive coal-fired power plants.

It is “the latest in a series of illegal and destructive rules, in tens of thousands of pages, published by the Obama administration, which clearly aim to destroy the United States coal industry and affordable electricity for all Americans,” he said.

In the final rule, the EPA estimated compliance would cost around $480 million each year, offset by monetary benefits totaling $451 billion to $566 million.