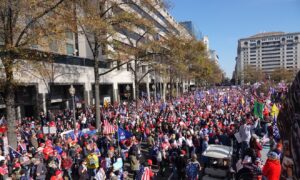 At least two buses of patriots from Boston rushed overnight to Washington D.C. to participate in protests against election fraud and corrupt media. They expressed their deepest concerns about communist infiltration in U.S. society and lying mainstream media.

John Hugo, a trip organizer, said that they have about 100 patriotic people who can’t sit by and let the election be stolen.

“We got two big busloads of people and we’re all raring to go, we’re just fiercely patriotic people, and we’re not going to sit still for this steal. And that’s what it is, it’s a stolen election, painfully obvious cheating, painfully obvious organized cheating for that matter, and mainstream media is saying nothing, they’re lying, they’re suppressing it. Youtube today said they are going to delete any stories about election cheating, these are our new masters apparently, they’ve done an end-run around the First Amendment, and only publications like The Epoch Times, Boston Broadside, publications like that actually telling the truth. ”

“If we lose this time, we won’t have another chance, our world would be gone, we’re going to be done. So we really need to focus, we want unity, we don’t want dissension. The left wants dissension, they want violence, we peacefully protest, we go somewhere, nothing’s burning, no looting. It’s all about unity, peace, happiness.”

Jay Iselin of Massachusett believes that this is the most important moment in U.S. history, and that progressivism is just an unborn type of communism.

“This is a very crucial moment in our nation’s history, one almost can’t think of a moment as crucial as this one happens to be, and what we’re facing is a nascent communism, progressivism is nothing but a communism waiting to be given full birth. So we have a judgement upon us, in this nation, we have the eyes of God upon us,” Iselin siad.

Bao Chau Kelley from Vietnamese for Trump affirmed that America is not going to turn out to be a communist country. “President Trump already won this election by a landslide throughout the whole country, and the media lied, we have evidence. Media is the real virus of this country, so stop watching the fake news, and that’s why we’re going down to D.C., march to CNN, to tell CNN and all the fake news to stop the lies!”