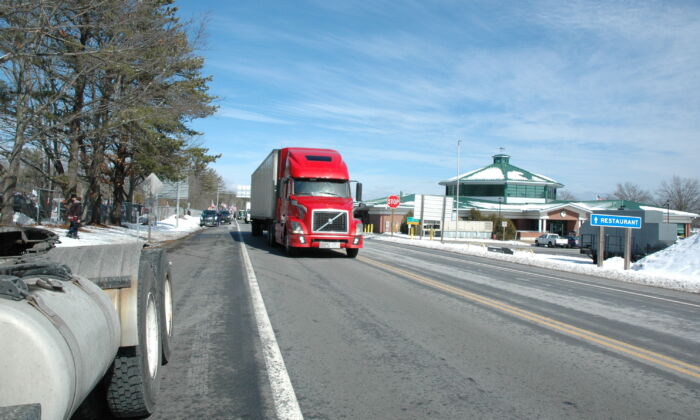 The Northeast convoy began its journey at on Mar. 2, from Hermon, Maine, a small town in the dead center of the state. (Alice Giordano/The Epoch Times)
US News

A convoy of New England truckers was met with cheers from crowded overpasses stretching from Maine to Connecticut as they kicked off the Northeast trek of a national truck convoy headed to the Washington D.C. area to protest against COVID-19 mandates and other government directives.

The Northeast convoy began its journey at 7 a.m. on Mar. 2, from Hermon, Maine, a small town in the dead center of the state known for its skiing, fishing, hiking, and camping.

The truckers stopped for a rally at a seasonal roadside motel that abuts a truck stop off I-95 in Kennebunk where a large crowd carrying American flags and bearing signs like “Medical Choice, Medical Freedom” and  “Honk 4 Freedom” awaited them.

The crowd was a mix of both vaccinated and unvaccinated people.

Among those gathered was U.S. Marine veteran Kevin Gerry, who chose to get vaccinated, but is adamantly opposed to any mandates of it, he told The Epoch Times.

“I spent nine years fighting for the same freedoms this administration has taken away,” said Gerry who completed nine tours with the Marines. “As far as I’m concerned it’s illegal in my book—my life, my rule.”

Neal Grenier, a Maine trucker who did not get the vaccine, told The Epoch Times he  joined the convoy to stand up for “freedom of choice.”

Many speakers addressed the crowd including Maine doctor Dr. Meryl Nass, who had her license suspended by the state for prescribing alternative treatments to the COVID vaccine.

Asked why she chose to participate in the truck convoy Nass told The Epoch Times it was because she was concerned America was “fighting another battle of 1776.”

“This is about maintaining our way of life, continuing constitution law in the United States, and improving our institutions.”

Former Maine Republican lawmaker Heather Sirocki, who also spoke at the rally, really fired up the crowd when she told them that there are three kinds of people, “People who make things happen, people who watch things happen, and people who wonder what just happened?”

The truckers and those who helped organize the freedom convoy, Sirocki told the crowd, “are making things happen!”

Maine is the largest New England state and one of 13 U.S. border states to Canada, which saw massive protests by truckers against government overreach.

Maine is also one of three states that prohibits religious exemptions for those mandated to get the vaccine. About 2,000 health care workers recently lost their bid to have the U.S. Supreme Court hear their petition on the religious exemption ban.

Tiffany Kreck, a co-founder of Freedom Choice Maine that organized the Maine convoy, told The Epoch Times that the state has been especially hit hard by government regulations on logging, fishing, and trucking industries.

Besides organizing the convoy, her organization also boycotts companies that are continuing to require the vaccine despite the recent U.S. Supreme Court ruling blocking President Joe Biden’s directive that U.S. companies with 100 or more employees must require the vaccine.

One of the companies it recently boycotted is the Michigan-based rugged clothing giant Carhartt.

In a letter addressed to “Carhartt Associates,”  the company’s CEO Mark Valade, wrote that “an unvaccinated workforce is both a people and business risk that our company is unwilling to take.”

“How arrogant to think you are entitled to someone else’s medical information and control of the medical decisions they make,” the Maine group wrote in protest.

The group asked people to “politely” let Carhartt know they were all done with their products.

After the rally the Maine truckers hit the road to join other drivers from Vermont, New Hampshire, Connecticut, Rhode Island, New York, and Pennsylvania, to form the Northeast contingent of the “People’s Convoy,” a national grassroots group of American truckers who are planning a protest in the Washington D.C. area this week.