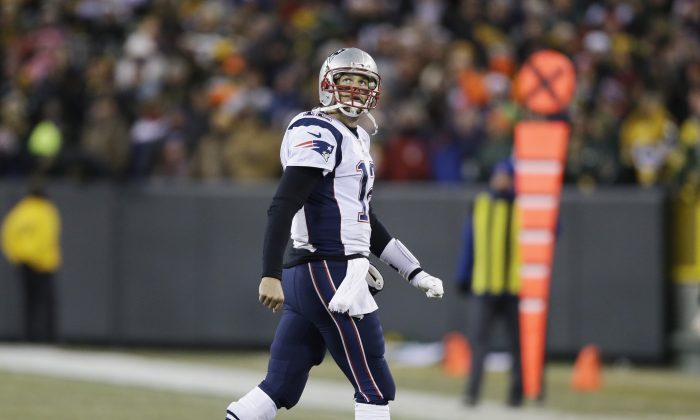 New England Patriots' Tom Brady looks back as he walks off the field during the second half of an NFL football game against the Green Bay Packers Sunday, Nov. 30, 2014, in Green Bay, Wis. The Packers won 26-21. (AP Photo/Tom Lynn)
NFL

After the Patriots suffered their third loss to the Green Bay Packers on Sunday, they’ll play the Chargers in San Diego next week. Since 2003, the Patriots are 36-4 in regular-season games following a loss. Here’s some of the latest buzz:

During the Patriots’ loss to the Packers on Sunday, images were circulated around Twitter of Tom Brady wearing a “leash” during the game.

Brady was spotted early in the the third quarter being pulled by strength and conditioning coach Harold Nash.

“Oh man. That’s just … a leash … it’s a resistance band,” Brady recalled on Tuesday morning, according to ESPN. “I was just trying to stay warm and that helps me stay really warm. It’s a great exercise to do.

“When I’m out there in the game, I don’t get a lot of chance to run around, like the receivers who are running the whole game. So I just like to stay really loose, as loose as I can in inclement weather. So that’s what that was for.

What, exactly, is that leash tied to RT @TheCauldron: Tom Brady on a leash is my favorite NFL picture this season pic.twitter.com/gUkcRDue16

Belichick, Kraft could be called in for Hernandez trial

In a motion released Monday, Hernandez’s lawyers asked a judge to order prosecutors to pare their list of more than 300 witnesses. Hernandez is charged in the 2013 killing of semi-professional football player Odin Lloyd, whose body was found in an industrial park about a mile from Hernandez’s home in North Attleborough.

Hernandez’s lawyers argued that it is “inconceivable” that prosecutors will call each of the 305 people on their witness list and asked a judge to order them to reduce the list to people they actually intend to call during the trial, which is scheduled to begin in January in Fall River.

Judge E. Susan Garsh denied the motion, but she urged the parties to pare the list “to the extent practical to avoid an unnecessarily protracted trial.”

Gronkowski says he should have caught TD pass

TE Rob Gronkowski said that he should caught a near-touchdown pass that would have put the Patriots ahead with 3:30 remaining.

“Tom just threw it up,” Gronkowski said, via CSNNE. “It was a fade route. Just had to go up, make a play.”

Brady threw the pass early for Gronkowski to run under it and catch it but he wasn’t able to grab it before it hit the turf. Packers CB Ha Ha Clinton-Dix was covering him.

“I’m pretty sure I caught it,” Gronkowski said. “And at the last second the DB made a nice play. He hit it out of my hand. It was a good play by him. Just when my number’s called, I gotta come down with those plays right there.”

Gronkowski credited Green Bay for besting the Patriots. “They’re a good team,” he said. “They play hard. They got good players. Gotta give it to them.”

Next page: How will Pats prepare for Chargers?