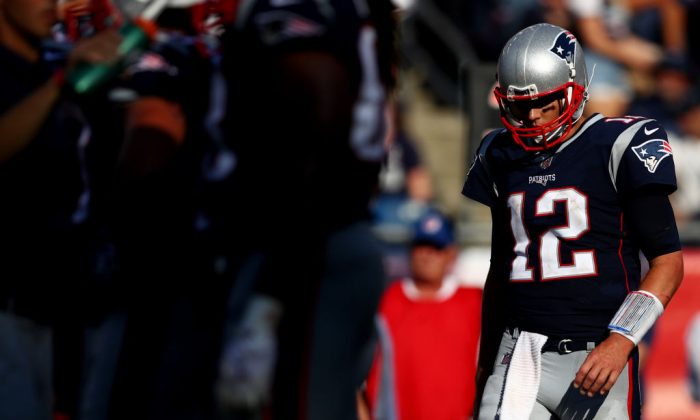 Tom Brady of the New England Patriots during a game against the Houston Texans.(Maddie Meyer/Getty Images)
NFL

A man held a jersey-burning party where New England Patriots merchandise was burned in a bonfire in Massachusetts after this week’s game.

Over 100 people reportedly attended the party, held by Mark Shane of Swansea, Massachusetts. Many of those attending were veterans. They sang patriotic songs as they burned Patriots jerseys in a show of frustration of national anthem protests, reported CBS Boston.

“I think it was a great success,” said Shane via WBZ. “I think people were united, I think people love our country and I think it sends a great message to the NFL and any divisive type actions will not be tolerated during sports.”

“It upsets me that they, I understand we do have issues with this county [sic] that need to be resolved and I think that’s not the platform to be doing it,” said event attendee Andy Lavoie, when asked about the pre-game protests.

“Some of those young kids they don’t know what us old guys went through,” said jersey burner Arthur Dallaire, on the anthem protests.

The fans who hauled in their jerseys, shirts, and other Patriots clothing didn’t burn everything. They burned a portion and gathered the rest to be donated to recent hurricane victims.

Patriots players tried to explain what they wanted to achieve with the protests.

Patriots star quarterback Tom Brady had little to say about the protests.“I believe love is the greatest thing we have to overcome a lot of things,” said Brady. He stood for the anthem with his hand over his heart, but also locked arms with his teammates. Brady was conspicuously absent when the Patriots celebrated their super bowl win at the White House this past April. The team was highly praised by President Trump during the visit.