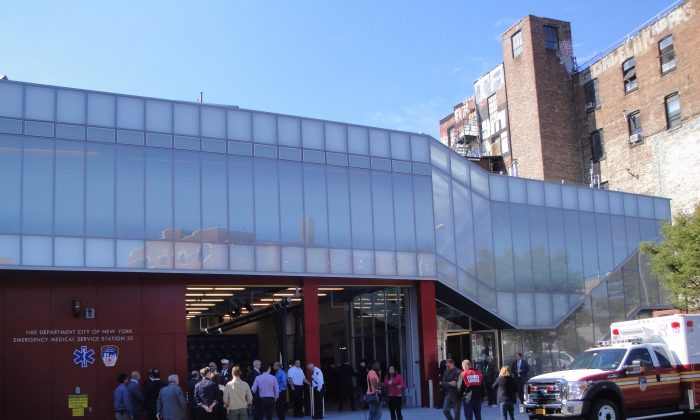 The building had to be designed in a way to maximize the efficiency of the staff and it also had to fit in the neighborhood where most of the bulidings do not exceed two stories.

Until Sept. 23, station 35 was based at Woodhull Medical Center on Flushing Avenue. EMS Station 35 Capt. Edward Bobb said his team had been looking forward to the move for a long time. Construction started in September 2010, and finished just a few weeks ago on Sept. 16.

“Today we are seeing the results of our hard work. … It’s a proud day not only for the neighborhood, but also for the department,” Cassano said.

The building is 12,931 square feet, and cost $9.3 million to construct, according to the New York City Department of Design and Construction. The FDNY funded the construction and gave a higher cost at $12.5 million, which also included design costs and the commission to sign off on the project.

It has a partial basement with an above ground fuel tank and space for an emergency generator. The first floor is the apparatus floor—where they park ambulances. It includes offices for the captain and two lieutenants, and storage areas. The second floor has an open-plan kitchen and lounge, male and female locker rooms, a training room, and an exercise room. There is also an outdoor patio.

David Resnick, deputy commissioner of public buildings for New York City Department of Design and Construction, said the station was meant to be an iconic building, and “a symbol of what EMS provides to the community … readiness and availability to provide service.”

Since 2002, FDNY has opened 10 new EMS locations across the five boroughs.