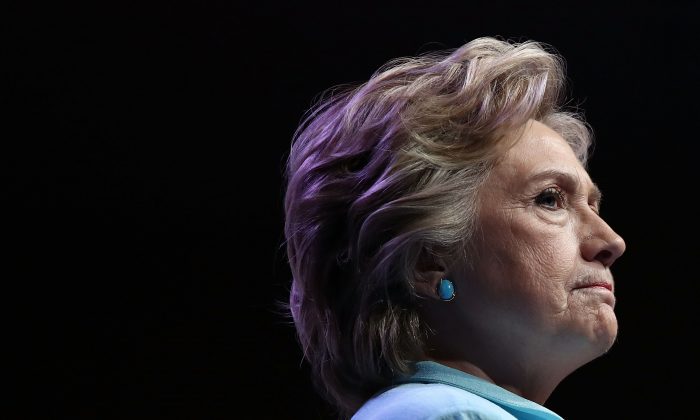 Records show an official from the Clinton Foundation, Doug Band, pushing for a job for an associate by asking Clinton’s aides at the State Department to help. Clinton served as secretary of state from January 2009 to February 2013. Band was co-founder of Teneo Strategy with Bill Clinton and a top official of the Clinton Foundation.

Band told the aides, Cheryl Mills and Huma Abedin, in an April 2009 email under the subject line “A favor…” that it is “important to take care” of a person whose name had been redacted. Abedin then replies to Band saying, “We have all had him on our radar. Personnel has been sending him options.”

In another 2009 email, Band asks Abedin and Mills to help a top Clinton Foundation donor, Lebanese-Nigerian billionaire Gilbert Chagoury. Band asked the aides to get Chagoury in touch with the State Department’s “substance person” on Lebanon. In the email Band says Chagoury is a “key guy there [Lebanon] and to us.” Band also asks that Abedin call Ambassador Jeffrey Feltman to connect him to Chagoury.

In 2000, Chagoury was convicted in Switzerland for laundering money from Nigeria. He pleaded guilty and was forced to pay back $66 million to the Nigerian government.

“They show the Clinton Foundation, Clinton donors, and operatives worked with Hillary Clinton in potential violation of the law,” he added.

The Clinton campaign did not immediately respond to requests for comment.

The emails showing ties between the Clinton Foundation and the State Department come after FBI Director James Comey recommended no criminal charges regarding the investigation of Clinton’s handling of classified emails after a year-long investigation.

Comey reiterated before a hearing in July that they “did not find clear evidence that Secretary Clinton or her colleagues intended to violate laws governing the handling of classified information.”

The FBI director told the committee he saw evidence of “great carelessness” in Clinton’s use of a private email server, but that he did not see “enough evidence” to establish a case based on gross negligence.