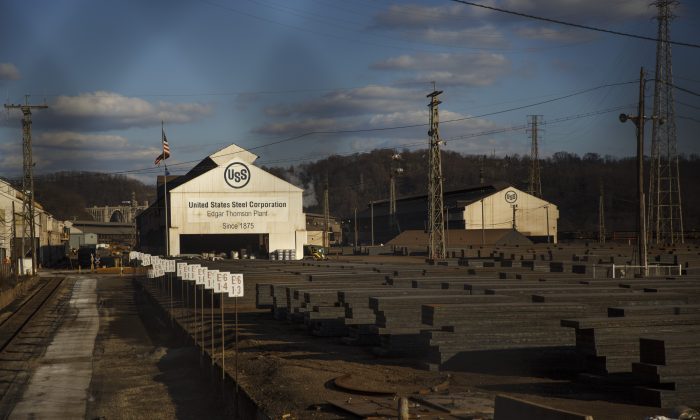 Despite many critics projecting that tariffs will push the U.S. economy into a recession, a newly released study predicts that the duties will promote job growth in the United States.

According to the Coalition for a Prosperous America (CPA) on Nov. 27, the steel tariffs put in place by President Donald Trump, in combination with other economic policies, will drive the growth of 2.1 million additional jobs in 2018 over the baseline forecast. An additional 1.2 million jobs are expected to be created annually in the years 2019 through 2021.

Jeff Ferry, the research director at CPA, told The Epoch Times that tariffs contributed about 10 to 15 percent of the total job growth.

“This ground-breaking economics study by the CPA Economics team shows that the steel tariffs are benefiting the US economy,” CPA Chairman Dan DiMicco said in a release. “The same is true for other tariffs implemented this year. If we continue to follow rational trade policies, the benefits will be felt by every worker, farmer, and shareholder in the U.S.”

CPA’s study is based on a new economic model.

Ferry said there is a major difference between the new model and the old standard models when performing the analysis. When the new tariffs were imposed, the old models would only adjust price increases caused by the tariffs, while assuming nothing else changed in the economy.

Using steel tariffs as an example, Ferry pointed out when the new steel tariff was imposed, the old models would assume the steel products’ prices increase reflecting the higher cost of steel, which would then result in less market consumption. However, the old models miss the expansionary effects of a steel industry that is growing and investing in local communities.

One of the key findings of CPA’s research has been that while tariffs have led to a rise in steel prices, the increases have been absorbed by steel-using industries with a minimal negative effect on demand and profitability, and often with positive effects.

“We hope these modeling improvements will provide some much-needed reality in the debate over tariffs,” Ferry said.