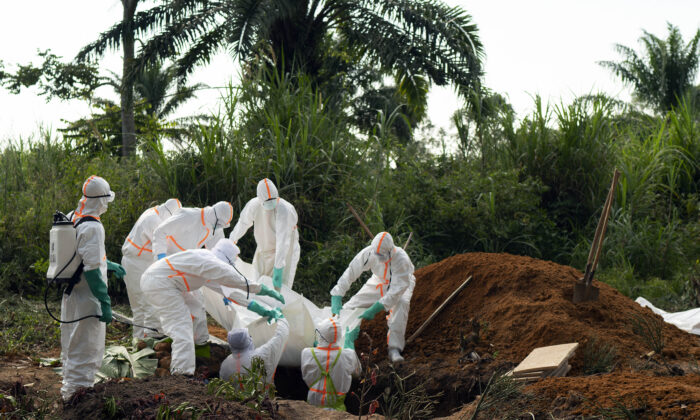 An Ebola victim is put to rest at the Muslim cemetery in Beni, Congo, on July 14, 2019. (Jerome Delay/AP Photo)
By Jack Phillips

A new outbreak of the Ebola virus has infected 100 people in the Democratic Republic of the Congo in Equateur Province, according to the World Health Organization (WHO), which said several dozen people have died.

The outbreak was first declared on June 1 in the province, and a cluster was first found in Mbandaka, the capital.

“The outbreak has since spread to 11 of the province’s 17 health zones. Of the 100 cases reported so far, 96 are confirmed and four are probable,” the agency said.

Some 43 people have died from the deadly virus, which causes hemorrhagic fever.

“The outbreak presents significant logistical challenges, with affected communities spanning large distances in remote and densely-forested areas of the province, which straddles the Equator,” said WHO. “At its widest points, the outbreak is spread across approximately 200 miles both from east to west and from north to south.”

The agency said that providing relief to affected populations can take days. Supplies and first responders have to travel areas that don’t have roads and may have to rely on river boat travel, according to WHO.

In the same province, an outbreak of Ebola occurred in May 2018, killing at least 33 people.

“With 100 Ebola cases in less than 100 days, the outbreak in Equateur Province is evolving in a concerning way,” said Dr. Matshidiso Moeti with WHO. “The virus is spreading across a wide and rugged terrain which requires costly interventions and with COVID-19 draining resources and attention, it is hard to scale-up operations.”

The provincial health minister, Bruno Efoloko, said the governor had concluded negotiations with the striking workers late on Monday afternoon. They were protesting against the health ministry’s recent publication of their pay scales, which they thought were too low, and the government’s failure to pay them since the start of the new epidemic, Keita said.

“The negotiations were successful. The laboratory is now operational,” Efoloko told Reuters, adding that some lab technicians had returned to work after the talks. “The national ministry of health promises to examine their claims,” Efoloko said. “We will continue to educate others for an effective resumption of activities.”

In June, Congo celebrated the end of a separate Ebola outbreak in the east of the country, the second-worst on record, which killed more than 2,200 people over two years.

WHO said over the weekend that the current response is indeed in need of funding.

“Without extra support the teams on the ground will find it harder to get ahead of the virus,” said Dr. Moeti. “COVID-19 is not the only emergency needing robust support. As we know from our recent history we ignore Ebola at our peril.” He was referring to the disease caused by the CCP (Chinese Communist Party) virus.