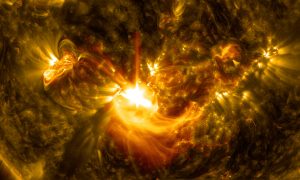 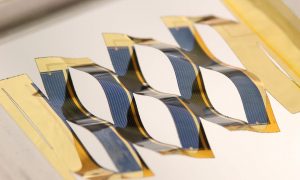 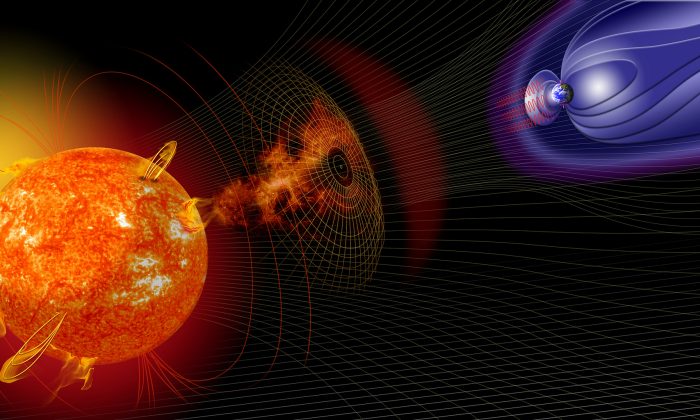 The sun can erupt with flares more energetic than 30 billion times the yield of all nuclear weapons ever detonated. The energetic particles released by solar flares tunnel a path through our inner solar system with speeds regularly exceeding 6 million kph (about 3.7 million mph). If the Earth is unfortunate enough to sweep through the path of these particles, they can cause catastrophic problems by acting like bullets of radiation, damaging electrical and electronic equipment.

Experts have warned that even a single monster solar flare could cause up to U.S.$2 trillion worth of damage on Earth. This could include the loss of communication and navigation satellites and electricity grids. Dangers to human life and health could follow.

With this in mind, it is no wonder space weather has now been added as one of the greatest dangers to life on Earth in the U.K.’s national risk register, only fractionally behind terrorist attacks. It’s paramount that we study the behavior of the sun so we can create an early-warning system to alert of us impending danger from this kind of space weather.

Solar flares’s incredibly destructive power comes from the magnetic fields that are visible across the sun’s entire surface but are most concentrated within regions called sunspots. These spots can be huge, some many times bigger than the Earth, with magnetic field strengths thousands of times more intense than those in the surrounding “quiet” parts of the sun.

As these strong magnetic fields leave the surface of the sun, they extend upward many thousands of miles into the corona, the region of the sun’s atmosphere visible during total solar eclipses. Here they shape the charged particles (plasma) of the corona into giant loop-like structures. The physical strength of the magnetic field lines at the top of these loops is 100 times smaller than similar regions on the solar surface, but the loops still possess immense energy that can twist and shear.

Constant buffeting from the underlying atmosphere adds tension to the magnetic field loops, similar to an elastic band being stretched. Scientists believe that when the loops restructure themselves to release this tension they give off a huge blast of electromagnetic energy into space, creating a solar flare.

My colleagues and I, working with an international team of researchers, have devised a high-precision way of studying the sun’s atmosphere that is up to 10 times faster than previous methods. Using images of all layers of the sun’s atmosphere taken by specialist telescopes on Earth and in space, we have discovered a wealth of compressible waves similar to sound waves traveling along the magnetic loops. We believe these are caused by vibrations close to the solar surface that are initially trapped within the turbulent layers of the sun’s interior before leaking outward toward the visible surface.

The speed of these waves, which can reach 800,000 kph (about 500,000 mph), depends on the characteristics of the sun’s atmosphere, including its temperature of around 1,000,000 degrees C (about 1.8 million degrees F) and the strength of its magnetic field. Studying the wave speed and temperature at different locations in the sun’s atmosphere at any given time allows us to calculate the magnetic field strength at that point. So by studying how the magnetic field changes on very short timescales, we have the potential to identify the precursors responsible for solar flares and space weather.

Our new method, which we describe in the journal Nature Physics, can uncover changes in coronal magnetism within around one minute. This is a dramatic improvement on previous direct imaging approaches that often required exposure times exceeding one hour to be able to extract the faint magnetic signals. This means we have a much faster way of examining magnetic field changes in the lead up to solar flares. Ultimately, this could be used to provide advanced warning against such violent space weather.

Our next goal is to fully automate the processes so we can continually monitor the Sun’s coronal magnetic fields in real-time. We hope to use software with artificial intelligence to study the large amount of data this produces and learn why, how, and ultimately when solar flares will erupt. This may not necessarily protect us from the resulting onslaught, but it will provide us with crucial advanced warning. This could buy us enough time to minimize the damage associated with 100 billion kilograms (220 billion pounds) of solar “bullets” speeding toward Earth at over 6 million kph (nearly 4 million mph).

David Jess is a lecturer and STFC Ernest Rutherford Fellow at Queen’s University–Belfast. This article was originally published on TheConversation.com