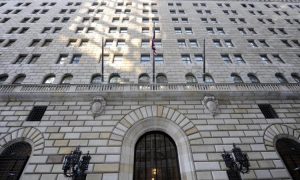 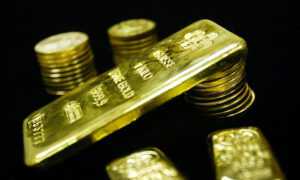 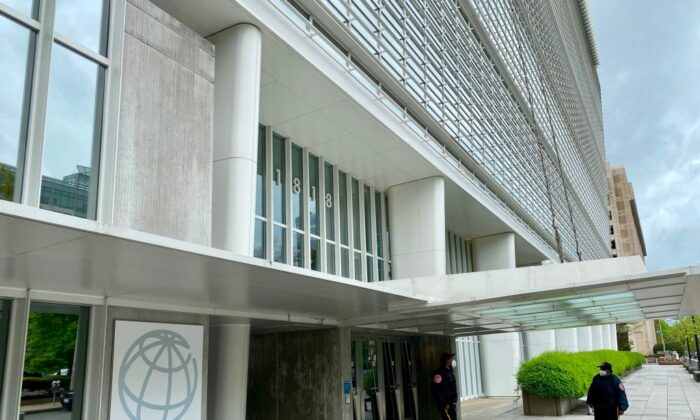 A security guard walks near the World Bank Group building on an empty street in Washington, on April 13, 2020. DANIEL SLIM/AFP via Getty Images
Investment

Capitalism has a natural way of resetting itself. Markets reward winners while punishing losers. Losing businesses restructure, finding a better angle to compete, or else go bankrupt. The business owner, hopefully wise enough not to fall into complete ruin, starts over and re-enters the market, wiser and more competitive than before (at least, that’s the idea).

If an entire economy gets mismanaged, then the same austere consequences that may befall a single company also befall an economy. That is, unless a governing body intervenes, deviating from the natural course of “capitalism proper.” This latter route is what the Federal Reserve has done for decades and continues to do to this day.

By bailing out the nation’s “bad economic actors,” and forestalling the resetting process, the Fed is consigning the future of the United States to a weakened state. By putting the nation into massive debt, the future growth of a “natural” economy is being choked to death, forever reliant on central bank stimulus.

There will be a breaking point. But it may be far from what most anticipate.

Amid the COVID-19 crisis, central banks across the world have been working to put out the economic flames to which we as of yet see no end. Interest rates have already been driven to near zero (some are at record negative rates), with central banks pledging to continue asset purchases in the trillions of dollars.

With most central banks virtually “out of ammo” to counter the deflationary trend in the equities markets, the only viable solution is to … unsurprisingly … extend quantitative easing. With the negative consequences affecting almost every major economy across the globe, the United States is in a particularly precarious situation.

And it all comes down to what might happen this October when the International Monetary Fund (IMF) meets, between Oct. 12 and Oct. 18, to revalue its special drawing rights (SDR)—the world’s reserve currency waiting in the wings. Essentially, a new “Bretton Woods” is in the making.

A New Bretton Woods Minus the Dollar?

The IMF’s SDR is a form of “world money,” created in 1969 as an alternative to the U.S. dollar (in case the dollar somehow fails … that was the idea). They were issued on several occasions from 1970 to 1980, but then there were no issues for almost 30 years, until August 2009, which was in response to the last financial crisis.

Well, here we go again. The IMF knows that SDRs are unpopular, but they also know the world is desperate for liquidity right now during the COVID-19 pandemic. To exploit this crisis, the elites are thinking big about a new Bretton Woods-style conference, a new international financial system, and a global tax system. SDRs would eventually replace the U.S. dollar as the global reserve currency.

According to a recent Project Syndicate report, both the IMF and World Bank are “being asked to throw away their rulebooks to save the world’s imperiled developing economies.” The problem with the current financial system, hammered out in 1944 at Bretton Woods, is that it was “built for a different world,” aimed at preventing wars (think World War II) and regulating economic function on a global scale. Clearly, it was a world of industrial production, manufacturing, trade, and, most importantly, clear borders where physical goods—cash and commodities—were traded.

Today’s digital world hardly recognizes yesterday’s economic needs and reality. A new technological and governance structure is necessary to upgrade a defunct system, so goes the argument. If you read between the lines, the prospect looks less like a rebalance and more like a “fiscal reckoning” on a global scale.

When it comes to the IMF and World Bank, voting rights are based on the size of each shareholder. The G-20 nations make up the key players, the largest being the United States with 16.5 percent voting power (and, conversely, veto power).

Although the Trump administration has generally been cooperative with the IMF over the course of President Donald Trump’s tenure, things took a turn in recent months.

President Trump’s move to halt funding for the World Health Organization (WHO) took the world by surprise. Secondly, the U.S. Treasury Department made it clear that, according to news site Foreign Policy, it wasn’t going along with “the SDR bandwagon,” Treasury Secretary Steven Mnuchin viewing SDR expansion as “ill-targeted.”

“Because SDRs are issued on a symmetrical basis in proportion to existing shareholding, 70 percent would go to G-20 members—most of which did not need them. Only 3 percent would go to those most in need. If members of the G-20 want to increase the SDRs available to poorer countries, they can start by lending them some of theirs,” states Foreign Policy.

So What’s the Immediate Threat, and Trump’s Potential Response?

The rumor, and big fear, is that the IMF may opt to remove the United States from the global SDR basket, effectively reducing the United States’ veto rights from the world stage. SDRs would then be a step closer to replacing the greenback as the world’s reserve currency.

Considering the potential damage that the Fed’s QE will inflict on the dollar, weakening its status as the world’s currency, the potential IMF move toward replacing greenbacks with SDRs would cause a massive devaluation of the dollar, possibly up to 80 percent. As much as President Trump has been influencing Fed actions (despite the bank’s statement to the contrary), having pressured their 180-degree turn from raising to cutting rates amid a balance sheet reduction, President Trump has never been a fan of the Fed.

With the Fed pledging to load up its balance sheet, and with the nation’s debt skyrocketing to heights unprecedented, it seems as if the bank and nation would be heading toward a state of insolvency. But this is where things get interesting.

With the IMF attempting to pull off a fiscal reckoning minus the U.S. dollar, President Trump may (as his adviser Judy Shelton has advocated and as President John F. Kennedy tried to do in 1963) pull off a global reckoning of his own, by issuing U.S. Treasury notes backed by gold.

The new dollars would be pegged to gold, possibly at a modest starting point of $10,000 or even higher, effectively returning the gold standard.

So, following a massive plunge in dollar values, we’d see a surge in gold prices and, with the new dollars, a surge in gold-backed dollar values as well.
I think you all see where the dangers and, more importantly, the opportunities are as we approach the October deadline.

A good piece of evidence that we are on this path is the president’s Good Friday Prayer for Our Nation to have its portion of silver and gold! Call us at 833-GSI-GOLD and we will send you a copy today!

GSI Exchange is an A+ rated firm with the BBB, AAA rated with the BCA, Forbes Finance Council listed, and Platinum Dun & Bradstreet verified. Call 833-GSI-GOLD or visit us on the web at GSIExchange.com to get more information or set up an account to convert savings into gold or silver and rollover IRA or 401(k) into physical precious metal IRA accounts, tax-free and penalty-free.