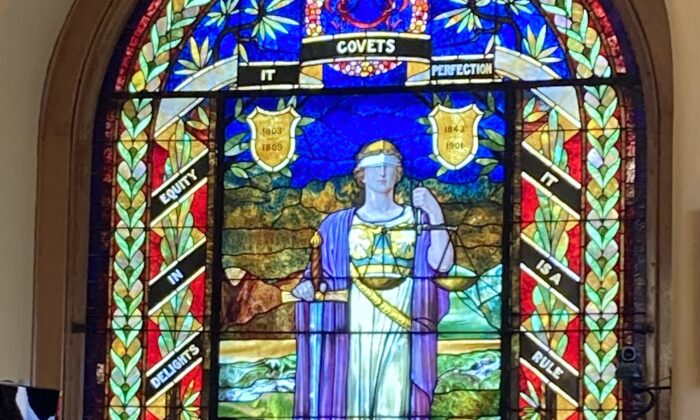 This stained-glass window depicts "lady justice" in the Xenia, Ohio, courthouse on July 22, 2022. David Lee Myers was convicted of murder in this courthouse in 1996. He protests his innocence. (Janice Hisle/The Epoch Times)
US Features

David Lee Myers has been on Ohio’s Death Row since 1996, awaiting execution for one of the most gruesome killings that anyone in Xenia, Ohio, can recall: A railroad spike had been jammed through a young woman’s skull, and rocks, which had been used to violate her sexually, had been left inside her body.

People around town say the shocking 1988 demise of Amanda Jo Maher, 18, is still referred to as “The Spike Murder,” almost like an urban legend; some say they are surprised that her convicted killer hasn’t been put to death yet.

But new DNA test analyses are casting doubt on Myers’ conviction, his lawyers say, asserting that new findings overshadow circumstantial evidence that helped convict their client of aggravated murder and other crimes connected to Maher’s slaying.

“Myers is not the source of male DNA found on key crime scene evidence used during the attack on the victim,” his lawyers wrote in court records. “This case is a textbook example of a wrongful conviction. Myers’ conviction is supported by false and misleading forensic science, ineffective defense counsel, and several other factors. The Court cannot have confidence in the verdict … (and) today no reasonable juror would convict Myers.”

His lawyers are asking a judge in Greene County, Ohio, to order a hearing on Myers’ claims of actual innocence. They also want the judge to throw out Myers’ convictions, vacate his death sentence, and order a new trial. As of July 24, no hearing had been set, and prosecutors were still preparing a response to more than 600 pages of legal pleadings and exhibits that Myers’ lawyers filed in recent weeks. The Epoch Times was seeking comment from prosecutors on July 25.

Filling 20,000 pages in federal court, the Myers case highlights the complexity of science-based “actual innocence” claims that are winding through American courts, especially old cases with physical evidence that has been misplaced or destroyed. In Myers’ case, authorities acknowledge they are still searching for several pieces of physical evidence his lawyers sought for possible testing.  The case also exemplifies persistent forensic science concerns that the National Academy of Sciences explored in its landmark 2009 report.

“Substantial improvement is necessary in the forensic science disciplines … to prevent the criminal justice system from erroneously convicting or exonerating the persons who come before it,” the report says.

Events leading to new DNA testing in the Myers case began in February 2020, when a federal magistrate judge decided to allow further testing. The ruling, which came more than two decades after Myers first sought DNA tests, granted Myers the right to see whether scientific advances could reveal evidence that might exonerate him or implicate another perpetrator.

A law firm in Columbus, Ohio—Vorys, Sater, Seymour, and Pease—has worked for Myers “pro bono” (without fee) for many years. Several other attorneys, including some from the Federal Public Defender’s Office, have also worked on his behalf. Lawyers from the Ohio Attorney General’s Office and the Greene County Prosecutor’s Office have been opposing the challenges to Myers’ convictions.

In her decision to grant Myers’ request for new DNA testing, U.S. District Court Magistrate Judge Kimberly Jolson wrote that the prosecution’s case against Myers was largely circumstantial “but was nonetheless damning in one critical respect—scientific evidence around which questions now swirl.” Those questions center mostly around DNA testing and microscopic analysis of a single “foreign” pubic hair that investigators found on the victim’s body.

Jolson cited “numerous and significant concerns” with trial witnesses’ assertions that the lone pubic hair could be linked to Myers. DNA testing was in its infancy when initial tests were conducted on the hair, the judge said, noting that science has evolved since then, and the tests are now more reliable. During Myers’ trial, jurors were told that the DNA profile obtained from that single hair was found in just 2 percent of the white population—and that the same profile was found in Myers’ DNA. However, a California DNA expert who reviewed the case states that a much larger group of people—up to three-quarters of the population—”are possible contributors to the DNA detected in this sample.”

Referred to as “the well-traveled hair,” in court, the single pubic hair had been transported to various laboratories for testing, increasing chances that the hair may have been contaminated, mishandled, or “inadvertently switched” with another hair, Myers’ lawyers wrote.

As a result of the federal judge’s order, a trio of experts scrutinized several pieces of evidence in Myers’ case. Testing of fingernail scrapings from Maher, Myers, and a possible alternative suspect produced nothing of value, as did tests on two rocks that were used to assault Maher sexually. However, on a third rock, testing revealed a partial male DNA profile. The expert who performed the analysis opined that “no conclusions can be made on this partial profile,” but he had no sample of Myers’ DNA to use for comparison at the time, court records say. Two experts, whom Myers’ team contracted, independently determined that Myers was “excluded” as a contributor of the DNA found on the rock. The state’s lawyers took “no position … regarding Myers’ expert reports or opinions,” nor on the admissibility of those reports in court, records say.

Another serious issue in the case involves pieces of evidence that cannot be located. These items remain missing now, more than two years after Jolson’s order:

“Whether intentional or otherwise, the State has failed to adequately preserve evidence in a way allowing Myers to effectively prove his case at trial or mount a full defense to the allegations against him,” Myers’ lawyers wrote. Authorities have said they are continuing the search for the missing items, which a judge ordered authorities to preserve in 1999, when Myers began seeking additional tests on the evidence. Myers’ lawyers submitted affidavits stating they were ill-prepared to counter the state’s DNA evidence at trial.

Trial evidence against Myers also included microscopic hair analysis, “which has now been discredited by the scientific community,” Myers’ lawyers wrote. “Hair comparison analysis was widely used before the development of DNA testing. It was thought to be a way to ‘match’ hair found at a crime scene to hair from a suspect.” Such comparisons are now considered “junk science,” and have been linked to wrongful convictions, Myers’ attorneys said in their court filing. In 2015, a federal review of FBI analysts’ testimony showed their statements were flawed in 90 percent of 3,000 microscopic hair analysis cases. In Myers’ trial, three experts testified about hair comparisons, attempting to link Myers to the single pubic hair found on Maher.

Myers, now 57, was 23 when he was arrested as a suspect in Maher’s death on the evening of Aug. 4, 1988. During the early morning hours of that day, a pair of teen girls found Maher lying along railroad tracks, fatally wounded and gasping for air. Initially, Maher’s identity was unknown; a police sketch artist made a rendering of her. But, before the sketch could be widely circulated, Maher’s mother contacted the police and reported her daughter was missing. Police identified the railroad-spike victim as Maher, based on her mother’s description. Maher was a mother of a 9-month-old girl and was about four weeks pregnant with a second child at the time of her death.

The night before his arrest, Myers had been at a local tavern, socializing with Maher and her boyfriend; after Maher’s boyfriend was arrested for disorderly conduct, Myers promised to make sure that the young woman got home safely. After being unable to find keys to her boyfriend’s car, Maher left on foot with Myers. A police officer testified he saw the pair walking together, only about 300 yards away from the spot where Maher’s body was later found in the early morning hours of Aug. 4. After Myers was jailed, fellow jail inmates reported they heard Myers make incriminating statements revealing details about the crime, including Maher being assaulted with rocks and the railroad spike—information that police hadn’t publicized, prosecutors say. During Myers’ trial, prosecutors also pointed out that Myers had previously been convicted of the sexual assault of another woman in a scenario they said was chillingly similar to the one that happened the night Maher died. The other woman, like Maher, needed help getting home from a local bar. She reported that Myers offered to take her home but drove her to a cemetery, where he raped her at knifepoint. He pleaded no contest to a reduced charge of sexual battery. Myers was on probation for that offense when he was arrested for Maher’s death.

The original 1988 indictment of Myers was nullified because prosecutors said they needed more time to investigate. Prosecutors charged Myers in an unrelated forgery case; he spent two years in prison. Then, in 1993, as Myers was about to finish his forgery sentence, prosecutors re-indicted him for Maher’s murder. The trial was repeatedly delayed until 1996, leading to his conviction after six weeks of testimony.

According to news reports, Maher’s family felt a sense of closure after waiting nearly eight years for justice.  But Myers, upon hearing the guilty verdict, shouted in court: “I didn’t do it! I swear to God I didn’t do it.” That outburst was “lame,” a prosecutor was quoted as saying.

Last month, Myers wrote in an affidavit: “I have maintained my innocence since my arrest … I have constantly worked on my case on my own, trying to obtain assistance from attorneys, organizations, friends and family members … but my efforts have been limited by my incarceration, lack of education and lack of funds.” He stated that he has a high school education, considers himself “computer illiterate,” and usually has about $25 in his prison account.