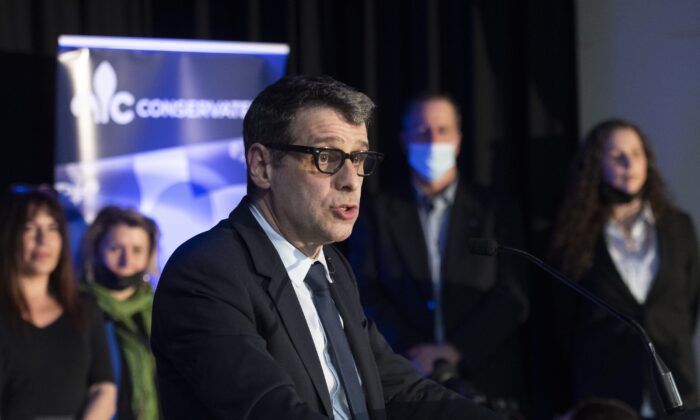 Quebec Conservative Leader Eric Duhaime speaks to supporters at a rally where he announced he will run in the Chauveau riding in the next provincial election in October, in Quebec City on April 5, 2022. (Jacques Boissinot/The Canadian Press)
Canada

Quebec hasn’t been a stronghold of conservatism in Canada in recent years. Quite the opposite. That’s why the rapid rise of the province’s Conservative Party is attracting considerable attention.

Conservative Party of Québec (PCQ) Leader Éric Duhaime, who gained fame as a conservative radio host and columnist, partly attributes the development to what he sees as a paradigm shift from a focus on language to one on issues related to freedom.

Duhaime says the PCQ is filling a “vacuum” left by opposition parties that didn’t push back when the provincial government imposed some of Canada’s most stringent COVID-19 restrictions.

While Duhaime works to strengthen his party’s alignment with the new focus, the language issue is still central to other parties.

When Duhaime was elected leader in April 2021, the PCQ barely had any members. In the span of a few months after he took the helm, the party went from 500 members to 58,000, making it the political formation with most members in the province.

The governing Coalition Avenir Québec (CAQ) has around 50,000 members and the Parti Québécois (PQ) around 42,000.

An analysis of donation records by the Le Devoir newspaper shows that the PCQ is also drawing the most donations to a political party by a large margin.

Le Devoir also found 94 percent of PCQ donors had donated to a political party for the first time.

The party currently has one member of the National Assembly (MNA) in the provincial legislature, who joined the ranks after being expelled from the CAQ in June 2021 for donating to the PCQ.

“Things have changed a lot, and what is splitting us right now, when you look at the polls and where people come from—it’s the age group,” Duhaime said.

People over 65 tend to be supportive of the governing CAQ because they’re more fearful of COVID-19 and support restrictive measures, Duhaime says, while younger people are leaning Conservative because “they’ve suffered” from the CAQ’s management of the pandemic.

But the linguistic fight is alive and well, with opposition mounting to a revamping of the language law through Bill 96, and with Legault declining to participate in the English-language leaders’ debate, saying it takes too much time to prepare. Legault did participate in 2018, however.

Another established paradigm shift took place in 2018 with the CAQ breaking the two-party system that reigned since 1970, which saw the Liberals and the PQ rotating at the top.

The recent byelection in the Marie-Victorin riding in Longueuil on the south-shore of Montreal signalled that the same trend continues, with the CAQ taking over the PQ stronghold it had held since 1985.

The CAQ currently has 76 of the 125 seats in the National Assembly. The Liberals have 27 and the PQ seven.

It’s one thing to make headway in gaining party memberships and financing, but quite another to win seats.

The centre of Quebec is where most of the 10 federal Quebec Conservative MPs originate, and the Quebec City area is the stronghold of conservatism in the province. Gains could be made there, but Duhaime is being prudent with expectations.

The PCQ leader didn’t say if he was getting support from the Quebec Conservative MPs, noting that there is “no organic link” between the parties.

Like the other party leaders, Duhaime’s campaign is putting a lot of focus on health-care and affordability issues, as rampant inflation adds to families’ costs of living.

His party’s efforts on these issues, in line with conservative ideology, would be taking health care out of state monopoly, cutting taxes, and resuming oil and gas exploration to fatten the government coffers.

“At the beginning, honestly, I thought that because of the [pandemic] crisis, the main issue would be health care,” said Duhaime.

“But now with the inflation going on, the price of gas going crazy, I think the other [affordability] issue is also going to be as important.”

The PCQ has attracted many who saw some of their civil liberties disappear under pandemic mandates and restrictions. The party has said it would legislate to prevent this from recurring and dismantle systems, such as vaccine passports, established during the pandemic.

The party’s sole MNA has already tabled Bill 898 in the National Assembly, which aims to hold the government to more parliamentary oversight when invoking a public health emergency.

“If we’re elected, the first thing we will do is to completely shred the information about the vaccine passport,” Duhaime said.

As for the plan by various governments to impose a digital ID scheme on citizens, Duhaime said it should be stopped immediately as there’s neither a demand nor a need for such a program, and they also carry security risks due to data leaks.

Quebec plans to start progressively introducing its digital ID program in June, saying it will “propel the citizen in the digital age by providing him a trustworthy digital identity and simplify his use of government services and those of the ecosystem.” The ID will be stored in a smartphone wallet app.

“We don’t see a need for the government to centralize information on citizens,” said Duhaime.

“There [are] huge risks with that. There’s a lot of people who are concerned, and rightly so.”