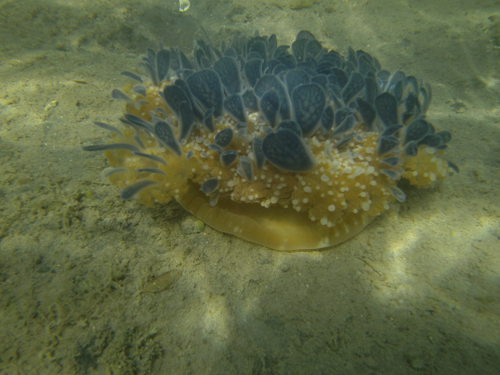 A routine field visit to coastal areas, turned into an incredible discovery when a team of marine biologists found a marine lake teeming with jellyfish in India’s western state of Gujarat. This is the first of its kind discovery in India.

Marine biologists from conservation organization Wildlife Trust of India were on their routine field trip in the small town of Arambada in Gujarat when they noticed a small water body. It had separated from the Gulf of Kutch because of a bridge and the only water exchange between this lake and the sea was through a water canal under the bridge.

Curious to see what kind of creatures they might spot in the lake, the scientists put on their snorkeling gear, took the underwater camera and began their underwater excursions. At the first dip close to the road bridge, they were surprised to find huge mangrove snappers and silver biddies curiously coming close to them and nibbling their skin.

Soon though, it turned out that their scientific curiosity had led them to a secret hideout not known before. At the bottom above the algae they noticed movement. Closer inspection showed that those were jellyfish – hundreds and thousands all over the lake bed. These aquatic creatures were upside down with their bottoms touching the lake bottom and were in fact a kind of jellyfish that thrives exactly in that position all its life.

The ‘upside down jellyfish’ as it is commonly called (Cassiopea sp) is mostly found in mangrove forests, shallow lagoons or mud flats.

“They position themselves on their bottom side to receive maximum sunlight as they harbor photosynthetic algae called Zooxanthellae, which have a symbiotic relationship with jellyfish similar to corals”, explains marine biologist S. Goutham, WTI.

“These jellyfish require carbon from the zooxanthellae but this does not meet their daily metabolic needs. The stinging cells attached on the umbrella like body called nematocysts assist in capturing prey. The jellyfish also filter feeds and absorbs dissolved nutrients from seawater as supplement food”.

What added to the surprise was that the jellyfish were found to be present in the lake all year round unlike other habitats where they have seasonal occurrence.

The scientists speculate that because jellyfish thrive in places where there is less wave action, it found a perfect habitat in the lake and the nutrient imbalance that promote jellyfish population.

“Certain species of upside-down jellyfish is used as potential bio-indicator for phosphate availability in low nutrient environments (Todd et al., 2006) and the predation could also be less in this lake which could be a reason for the bloom,” notes S. Goutham.

A local fisherman also informed the team about marine turtles that roamed the lake and were probably trapped here. The research team even spotted some of these turtles.

“A few places in the lake had sea grass which could have been the answer to the survival of these turtles. Also, further down there a population of green turtle preying on upside-down jellyfish which also could have contributed to its survival”, explained Prof. BC Choudhury, Principal Invigilator and Senior Advisor, aquatic programs, WTI.

But he adds that it would be better to rescue these turtles as they do not have a chance to breed here.

The unusual lake is surely a natural treasure discovered in India and one that could not only hold answers to unusual habits and habitats of marine species but also turn out to be a new eco-destination just like the world renowned jellyfish lake in Palau.

This article was originally written and published by Atula Gupta, the head administrator for IndiasEndangered.com. For the original story and more information, please click HERE.