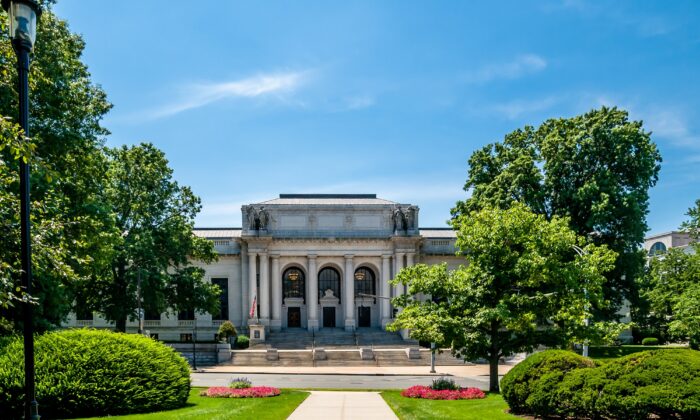 The Connecticut Supreme Court in a file photo. (Dreamstime/TNS)
US News

New Details Released in Case of Connecticut Judge Who Hasn’t Shown up for Work for 2 Years While Collecting $350,000 in Pay

HARTFORD, Conn.—Dozens of pages of new details became public Monday about the strange standoff between the state Judicial Branch and Superior Court Judge Alice Bruno, who has collected more than $350,000 in salary while missing nearly two-and-one-half years of work for what she describes as health-related reasons.

Bruno prepared the information herself in an unusual—and very long—affidavit in which she alleges the state Judicial Branch has exacerbated her health problems by creating a “stressful work environment related to the hostility toward my medical conditions and appointments.”

The judiciary has not responded to Bruno’s granular recitation of what she recounts as years of snubs and rebuffs to her demand for an “accommodation” that would allow her to work at a location “reasonably” close to her home in New Britain and in a setting that provides “a supportive, not hostile, work environment.”

Bruno, 66, asked the court to seal her affidavit and related medical attachments, which were filed as part of her effort to postpone an order requiring her to appear before the court on April 5 to demonstrate “why her failure to perform judicial functions for at least the last two years is not a violation of the following Rules contained within the Code of Judicial Conduct.”

The court declined to declined to rule on her request to seal the material from public view and, as a result, the affidavit was posted on the judicial branch website after most medical information had been removed.

The court scheduled the unusual hearing after years of negotiation failed to resolve the impasse with Bruno. She wanted to postpone the hearing until after a related inquiry by the Judicial Review Council, which investigates judicial misconduct such as unanticipated or prolonged absences by judges that can upend the orderly operation of the courts, in extreme cases leading to dismissal of cases.

Bruno filed her affidavit in an effort to postpone her April 5 appearance until after the Judicial Review Council completes its work. The Supreme Court denied the postponement in an order dated Friday and made public Monday.

Although most of Bruno’s recent medical history was redacted from the affidavit, her lawyer, Jacques J. Parenteau, told Courant columnist Kevin Rennie last year that “following emergency hospitalization for a cardiac procedure in November 2019, Judge Bruno has been on a leave of absence to address several health issues.’’

In the affidavit, Bruno also claims the judicial branch contributed to the stress she has suffered by opposing her desire to obtain therapy for an injured ankle and treatment for an infection that followed a vaccination.

She implies in her filing that the Judicial Branch now is asking that she submit to a competency review under a state law authorizing Chief Court Administrator Patrick L. Carroll III to order such an examination if a judge “cannot fully perform his or her judicial or magisterial duties by reason of mental infirmity or illness or because of drug dependency or addiction to alcohol.”

Bruno opposes such an examination, according to her affidavit. She argues it is harassment and shows the judicial branch is not “interested in finding a reasonable accommodation that would allow me to return to a supportive Judicial District in order to work as a Judge of the Superior Court.”

“On November 16, 2021, through counsel, I informed the Judicial Branch that no reasonable person would cite to (statute) § 51-45b as authority for a mental fitness examination based on the medical information that had been provided to the Judicial Department,” she wrote. “Rather than have a meeting to discuss the accommodation sought and the rationale for that accommodation, the Judicial Branch had abandoned the good faith interactive process by seeking an unwarranted medical examination.”

Bruno last reported to work on Nov. 14, 2019. In her affidavit, she claims “the stressful work environment related to the hostility toward my medical conditions and appointments to treat ongoing health issues reached a peak” two weeks earlier when she left work to see her primary care physician about an undisclosed medical condition. By that point, the Judicial Branch administration had become concerned about absences by her and other judges and had initiated an audit.

Bruno alleges that, “While I was in the doctor’s office Judge (Anna) Ficeto continued the harassment directed by Chief Court Administrator Carroll in leaving a voice mail on my phone that was critical of my taking time to attend to health issues.”

According to Bruno’s affidavit, in the voice mail message, Ficeto, who was supervising the Waterbury Courthouse, said she had become aware from a colleague that Bruno was taking a week off for medical purposes. Ficeto asked Bruno to provide a medical note. Ficeto also said there was an audit underway of sick time taken by judges and Bruno was likely to be included, the affidavit states.

“… So you just need to be aware of the fact that your attendance, your doctor’s appointments and all those things are being scrutinized at every level. I understand you’ve got doctor’s appointments coming up, once again they’re in the middle of the day,” the affidavit recounts Ficeto as saying n the voicemail. “You keep digging this hole for yourself Alice, I don’t know how many ways to tell you that what you’re doing is not acceptable. Call me when you get a chance. …. Thank you.”

Bruno, appointed by former Gov. Dannel P. Malloy, submitted a letter from her doctor on Nov. 26, 2019 and said she would be back at work Dec. 11, 2019. But she submitted another note before then, saying she was unable to return to work, the affidavit says

In her affidavit, Bruno claims that at one point the Judicial Branch proposed having her return to work in Waterbury—which is relatively close to her home, but also where Ficeto was working—as a proposed accommodation. Bruno said she rejected the officer because Ficeto allegedly had been hostile to her in the past, apart from what Bruno said she considered to be the antagonistic voice message.

“For example, after I was appointed to Waterbury Judicial District she would not say hello to me when passing me in building,” Bruno wrote.

Bruno said what she considers her mistreatment by colleagues began as early as 2015, the same year she was appointed to the bench.

“I was assigned to domestic violence docket in the Judicial District of Hartford in July of 2015,” she wrote. “During this assignment, I contracted a severe infection following a Shingles vaccination such that I was forced to work with a high temperature and fever because Chief Court Administrator told me that I could not take time off.

“It was also during this assignment that I was informed that I could not schedule doctor’s appointments on Monday or Friday, or even during the workday. As will be seen these unreasonable restrictions on my ability to obtain medical treatment eventually caused me to experience severe, physical stress and mental distress that resulted in hospitalization for cardiac distress symptoms in November of 2019,” she wrote.