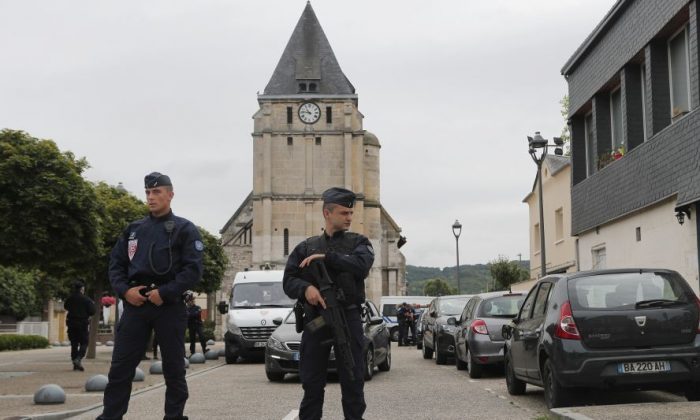 Police officers prevent the access to the church where an hostage taking left a priest dead the day before in Saint-Etienne-du-Rouvray, Normandy, France, Wednesday, July 27, 2016. The Islamic State group crossed a new threshold Tuesday in its war against the West, as two of its followers targeted a church in Normandy, slitting the throat of an elderly priest celebrating Mass and using hostages as human shields before being shot by police. (AP Photo/Francois Mori)
Europe

PARIS—More horrifying details emerged Wednesday about an attack on a French village church even as the country’s main religious leaders sent a message of unity and solidarity after meeting with President Francois Hollande in Paris.

Two attackers took five hostages Tuesday at the church in Saint-Etienne-du-Rouvray in northwest France and slit the throat of the elderly priest saying morning Mass. One of three nuns at the Mass slipped out to raise the alarm and both attackers, one of them a local man, were then killed by police outside the church.

Emotions in France are still raw after the July 14 Bastille Day attack in Nice that killed 84 people—and only became more frazzled Tuesday when the church in Normandy was attacked. With the attack threat for the country ranked extremely high, France is working to protect 56 remaining summer events and may consider cancelling some, Interior Minister Bernard Cazeneuve said Wednesday.

Defense Minister Jean-Yves Le Drian said 4,000 members of the Sentinel military force will patrol Paris, while 6,000 will patrol in the provinces. They are being bolstered by tens of thousands of police and reservists.

An 86-year-old woman who was one of the church hostages said the attackers had handed her husband Guy a cellphone and demanded that he take photos or video of the priest—85-year-old Rev. Jacques Hamel—after he was slain. Her husband was then slashed in four places by the attackers and is now hospitalized with serious injuries.

The woman, identified only as Jeanine, told RMC radio on Wednesday that her husband played dead to stay alive. Two nuns were held hostage along with the couple and the priest.

“He (the priest) fell down looking upwards, toward us,” said Jeanine.

“The terrorists held me with a revolver at my neck,” she said, adding it was not clear to her now whether the weapon was real or fake.

The Paris prosecutor, Francois Molins, said the two attackers had knives and fake explosives—one a phony suicide belt covered in tin foil. He identified one of the attackers as Adel Kermiche, a 19-year-old who grew up in the town and tried to travel to Syria twice last year using family members’ identity documents.

Kermiche was detained outside France, sent home, handed preliminary terrorism charges and placed under house arrest with a tracking bracelet, allowing him free movement within the region for four hours a day, Molins said.

A police official told The Associated Press that the bracelet was deactivated during those four hours, allowing Kermiche to leave the family home without raising alarms. The official was not publicly authorized to speak about the case.

The prosecutor’s office said Wednesday the second attacker has not been formally identified. In addition, police detained a 16-year-old whom Molins said was the younger brother of a young man who traveled to the Syria-Iraq zone of the ISIS terrorist group carrying Kermiche’s ID.

Hollande, meanwhile, presided over a defense council and Cabinet meeting in Paris after speaking with Roman Catholic, Orthodox, Muslim and Jewish leaders.

The archbishop of Paris, Cardinal Andre Vingt-Trois, called on Catholics to “overcome hatred that comes in their heart” and not to allow the Islamic State group “to set children of the same family upon each other.”

The rector of the main Paris mosque, Dalil Boubakeur, said France’s Muslims must push for better training of Muslim clerics and urged that reforming French Muslim institutions be put on the agenda. He did not elaborate.

In the town of Saint-Etienne-du-Rouvray, young and old were stunned by the attack.

An 18-year-old neighbor said he had seen Kermiche just three days earlier in nearby Rouen wearing a long Islamic robe.

When he heard about the church attack, “I knew it was him, I was sure,” the young man told the AP, identifying himself only as Redwan. He said Kermiche had told him and others about his efforts to get to Syria and “he was saying we should go there and fight for our brothers.”

“We were saying that is not good. And he was replying that France is the land of unbelievers,” Redwan said.

Candles were set out in front of the town hall as residents called for unity.

“We are scared,” said Mulas Arbanu. “(But) be we Christians, Muslims, anything, we have to be together.”

“From the moment when you touch a religion, you attack the nation, and you attack a people. We must not get into divergences, but stay united people as we were before,” he said.