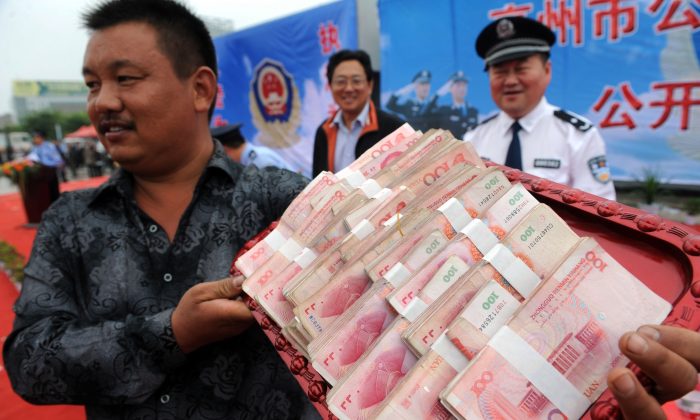 A businessman showing off his cash which was stolen and then returned to him by the police after a crackdown on a criminal gang in Bozhou, in eastern China's Anhui province. on September 14, 2011. (STR/AFP/Getty Images)
Business & Economy

China’s currency and the capital outflows behind it have dominated headlines and market analysis in the last half year.

The Bank of International Settlements (BIS) tracks this data and just released its findings for the third quarter of 2015, the period before, during, and after China’s shock devaluation of last August.

This BIS finds that China’s total cross-border foreign currency liabilities decreased $130 billion to $877 billion from the second quarter to the third quarter of 2015.

“This represents the sharpest single quarter drawdown since data were made available in the first quarter of 1978 and a 20.9 percent fall from its peak of $1109 billion in the third quarter of 2014,” the investment bank Nomura wrote in a note to clients.

Chinese banks owe most of the foreign currency debt ($530 billion) with other corporations owing the balance, although banks mostly facilitate these transactions for corporations.

After the financial crisis of 2008, Chinese corporations found it more lucrative to borrow in dollars for a very low single-digit rate and invest it in China for a low double-digit rate. Because the Chinese central bank guaranteed the Chinese currency to go up, they would make money through the exchange rate as well. As a result, Chinese external borrowing surged from less than $200 billion in 2009 to $1.1 trillion in 2014.

Why would Chinese corporations engage in financial speculation? Some say because there were fewer opportunities on the ground; others say Chinese companies just like to take any opportunity to make easy money, like investing in property even if it has nothing to do with the core business.

“Companies in the chemical, steel, textile, and shoe industries have started up property divisions too: The chance of a quick return is much higher than in their primary business,” Bloomberg Business reporter Dexter Roberts wrote in 2009 when the property boom was in full swing.

When property started to cool down in 2013, the carry trade was the next best alternative.

This helped the better connected companies and individuals get out even before the shock devaluation of August 2015.

“China’s private sector was better prepared for the renminbi weakness, given the fall in foreign-currency liabilities and foreign exchange hedging since 11 August 2015. In our view, this is an important factor why Chinese authorities have allowed for a more market-determined renminbi from early December to early January,” wrote Nomura.