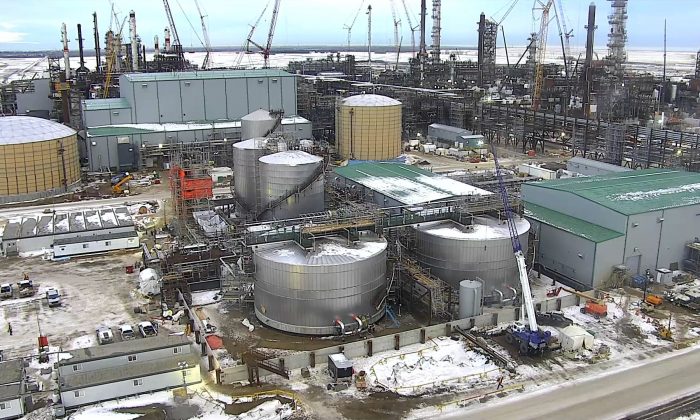 The North West Redwater Sturgeon Refinery, the first refinery in the world to be built with an integrated carbon capture and storage system, will reduce Alberta’s dependence on the export of raw bitumen. (Courtesy of North West Redwater)
Canada

New Cutting-Edge Refinery Could Be Boon for Alberta Oilsands

A huge cutting-edge refinery being built in Alberta’s industrial heartland could be a game changer for the oilsands when it comes to converting bitumen to diesel in an environmentally sound way.

Billing itself as “the next chapter in Alberta’s energy future,” the North West Redwater Sturgeon Refinery is the first refinery to be built with an integrated carbon capture and storage system.

“So if you said, ‘what is the cost of the diesel fuel you make,’ ours is about 30 percent lower than any diesel that is made from a typical oilsands plant.”

The first refinery to be built in Canada since 1984, Sturgeon will also reduce Alberta’s dependence on the export of raw bitumen by refining it in the province into ultra-low sulphur diesel and other products instead of sending it south of the border.

It’s quite unique. It’s the first refinery in the world that incorporates CO2 capture from the get-go.
— Ian MacGregor, North West Refining

“Canada has relegated itself to be hewers of wood and drawers of water, and what we have to do, we have to become furniture makers if we want our kids to live as well as we do. [Sturgeon] is at an early step in doing that—it’s a pretty significant step,” he says.

“The real issue is: If I put in the bitumen and have to send it somewhere, then I have to get it back—so I to pay to ship it somewhere then pay to ship it back. If we do it inside Alberta then we can eliminate all those shipping costs, especially south of the border now.”

The refinery is being built in three phases. When the $8.5 billion first phase is complete late in 2017, the contribution to GDP will average $2.3 billion and generate a total of $385 million per year in government revenues, according to a report commissioned by North West Refining, co-partner of the project with Canadian Natural Resources Ltd.

The entire plant will encompass about 250 hectares (an additional 485 hectares is available for further expansion) and operate with a 500-member staff. The current building phase employs 8,000 people.

Phase one will have the capacity to produce 80,000 barrels per day of high-value products that will supply local demand but can also access world markets. Regulatory approvals are in place for three identical phases with a total throughput of about 240,000 barrels per day of bitumen blend feedstock, according to the company’s website.

Canadian Natural Resources Limited and the Alberta Petroleum Marketing Commission will reportedly supply the first phase of the refinery with bitumen for a 30-year period.

Sturgeon will use air instead of water for cooling. Nearly 4,000 tonnes of CO2 captured per day becomes a paying commodity for injection into wells, with the potential to recover one billion barrels of oil that otherwise would be left in the ground.

Eventually, 40,000 tonnes per day of CO2 will be captured, equivalent to taking 2.6 million cars off the road annually. Ponds will capture runoff from rain and melting snow that in plentiful years will replace a portion of the 1.7-million cubic metres of water required annually that would be drawn from the river. Effluent, instead of being discharged back into the river, will be treated in the regional sewage system.

“It puts many pieces together in a visionary way,” he says. “It’s the type of infrastructure needed on the path to de-carbonization.”

MacGregor is anxious to begin construction of the other two phases now, before waiting for an assessment of phase one.