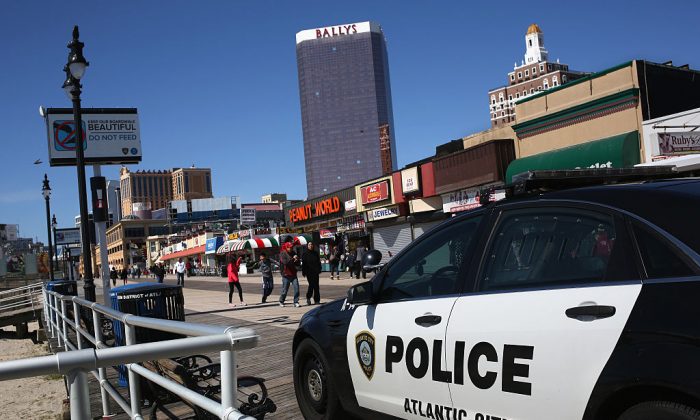 Tourists walk along the boardwalk in Atlantic City, NJ., on March 30, 2016. (John Moore/Getty Images)
US

ATLANTIC CITY, N.J.—Standing in his varicolored deli, Nael Zumot sported a broad smile as he shook the hand of his local patrol officer.

“They do an excellent job,” Zumot said. “Within two weeks, we see a lot of improvement.”

“You see now,” he said, pointing out beyond the glass door. “Nobody’s there, nobody smokes marijuana, nobody asks for money, nobody sells drugs, you know. Perfect—if it stays like this.”

Many other nearby business owners and employees shared similar stories—high credit for a new program the Atlantic City Police Department launched some two weeks prior.

Zumot was only worried that the hoodlums would return when the police move to clear out the next high-crime area.

Fighting crime is like a game of whack-a-mole. Police have long known that crime clusters around hot spots—bars, rundown houses, the proverbial dark alleys. Yet once they clear one up, another erupts.

But what if they can predict where the miscreant moles will rear their heads next?

Joel Caplan, a former police officer and criminology expert at Rutgers University, knows how. He takes the same crime maps police have used for decades and brings together the police, city government, and citizens to talk to each other about the crime-prone areas.

When Caplan pulled the research together, he realized crime especially festers where the crime-prone areas overlap. When police cracked down on a hot spot, sure enough, crime shifted to similar high-risk locations.

The results seem promising in the areas where it has been employed so far. In Newark, New Jersey, the police department was able to reduce gun violence by 35 percent in the area where RTM was used, compared to an area policed without change. In a similar fashion, the Colorado Springs Police Department cut down car theft by a third in the targeted area. And Arizona’s Glendale Police Department slashed robberies by over 40 percent in the targeted area.

Atlantic City has been preparing to launch the program since last year.

Because each city is different, RTM first needs to load up on crime data. After a year, Caplan had a good idea of where in Atlantic City most of the crime concentrates—notably around convenience stores and laundromats.

But figuring out the hot spots is just the first step. “That tells you where to go, but it doesn’t tell you what to do when you get there,” he said.
The crux of the strategy is the ACTION meetings, where Caplan brings together the police, various city agencies, and community representatives to figure out what it is about the places that attracts crime.

In Atlantic City, for example, gang members and drug dealers often hang around convenience stores because they like to buy loose cigarettes. They also use laundromats to deal drugs, because those places are often unattended and offer concealment.

Caplan thus helped the police to devise a simple strategy: Patrol officers should visit high-risk places as often as possible—every hour, for example. They don’t come to arrest people. Instead, they go into the businesses to say hello, exchange a few words with the owner or the manager, and continue on.

Business owners say it works. Ian Pullman has worked at a pawn shop on Atlantic Avenue for over two decades. The convenience store next door often attracts huddles of men that repel customers.

Sometimes he has tried to reason with the men, saying, “If you’re going to stand here and look like this, with the hoodies up, it’s going to look sketchy to my customers.”

“We’re just looking out for the police,” they would tell him. He assumes the men deal drugs.

We’re deploying people into areas that traditionally may not have received the same level of focus.
— Atlantic City Deputy Police Chief William Mazur

Having police officers pop in every so often keeps the loiterers on the move. “That’s good,” Pullman said. “You don’t get a whole group of them just hanging out, kind of setting up shop.”

Sergeant Brian Shapiro said he doesn’t know much about the RTM program yet. To him, patrolling the streets and talking to folks has always been his job. He’s respectful and friendly, but always on a lookout for anything that seems out of place. Within an hour on his rounds, he has talked to some dozen businesses and a couple of locals; warned two men to not display open beer cans; and organized a patrol car to take an elderly man home after a surgery.

Moreover, RTM informs more than police work. At the Feb. 15 ACTION meeting, other branches of city government are pushed to take responsibility for crime, too. Citizens asked: “If there’s a dark alleyway, why doesn’t the city install a light? When drug users and dealers use abandoned houses as hideaways, why doesn’t the city tear them down?” City officials who were present promised to look into the issues.

Man Who Returned to Crime After $25M Award Sentenced

RTM doesn’t give people jobs or teach them to resist vices, but it can cut opportunities for crime.

Rutgers makes the RTM methodology and training materials freely available on its website, making it hard to gauge how widely it has spread.