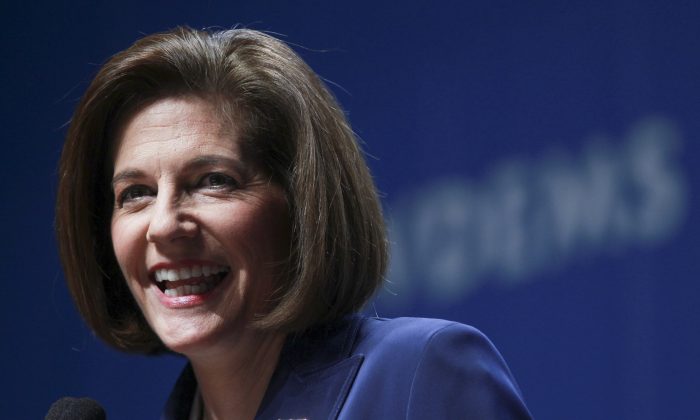 In this Nov. 9, 2016, photo, Sen.-elect Catherine Cortez Masto, D-Nev., speaks to supporters after her victory at an election watch party in Las Vegas. The next Congress will include a record number of minority women, but even with the gains, Congress will remain overwhelmingly white, male and middle-aged. (AP Photo/Chase Stevens)
Politics

WASHINGTON—Meet the new Congress — the first Latina senator, three House members moving across the Capitol to the Senate and a few former lawmakers who seized their old jobs back.

Just like college freshmen, the recently elected members of the House — at least 50 — descend on Washington on Monday for a week of orientation, a class photo on the East Front steps and a lottery to secure their new offices.

The next Congress will include a record number of minority women, but even with the gains, Congress will remain overwhelmingly white, male and middle-aged.

Democrats Catherine Cortez Masto of Nevada, Kamala Harris of California and Tammy Duckworth of Illinois are among a record 21 women who will serve in the Senate, up from 20 out of 100.

Cortez Masto will be the first Latina senator, while Harris and Duckworth will join Hawaii Democratic Sen. Mazie Hirono to form the Senate’s largest ever Asian-American contingent.

Harris, the daughter of immigrants from India and Jamaica, is just the second black woman elected to the Senate and the first with South Asian roots.

The House, meanwhile, will welcome its first Vietnamese-American and Indian-American women: Democrats Stephanie Murphy of Florida and Pramila Jayapal of Washington state.

Overall, the number of minority women in Congress will increase to 33 in the House from 27 and stand at four in the Senate.

A look at the new Congress:

Six new senators join the ranks — a seventh will be chosen next month in Louisiana’s runoff.

Duckworth, a two-term House member, is a veteran of the Iraq War, where as an Army pilot, she lost both legs when her helicopter was hit by a grenade. Duckworth, 48, was born in Thailand, to an American father and Thai-Chinese mother.

A former two-term Nevada attorney general, Cortez Masto, 52, also has worked as a prosecutor and chief of staff to former Nevada Gov. Bob Miller. Her father is of Mexican descent and her mother is of Italian descent.

Republican Rep. Todd Young of Indiana is a three-term congressman and former Capitol Hill aide. Democratic Rep. Chris Van Hollen of Maryland will replace Barbara Mikulski, who is retiring after 30 years in the Senate. A key lieutenant to House Democratic Leader Nancy Pelosi, Van Hollen, 57, has focused on budget issues and foreign policy.

Hassan, 58, will be the second woman in U.S. history to serve as both governor and senator. New Hampshire’s other senator, Democrat Jeanne Shaheen, was the first.

While the number of female lawmakers will remain static, the increased number of minority women is “a landmark for women’s participation in Congress,” said Debbie Walsh, director of the Center for American Women and Politics at Rutgers University.

Democrat Lisa Blunt Rochester will be Delaware’s first woman and first African-American in Congress, leaving just two states — Mississippi and Vermont — that have never sent a woman to either chamber of Congress.

Democrat Val Demings, an African American and the first female police chief in Orlando, Florida, won a seat in the House.

Fifteen Asian Americans will serve in Congress, including 12 in the House. That’s up from 10 in the current Congress.

Republican Sen. Lisa Murkowski of Alaska easily won re-election to a Senate seat once held by her father, Frank Murkowski.