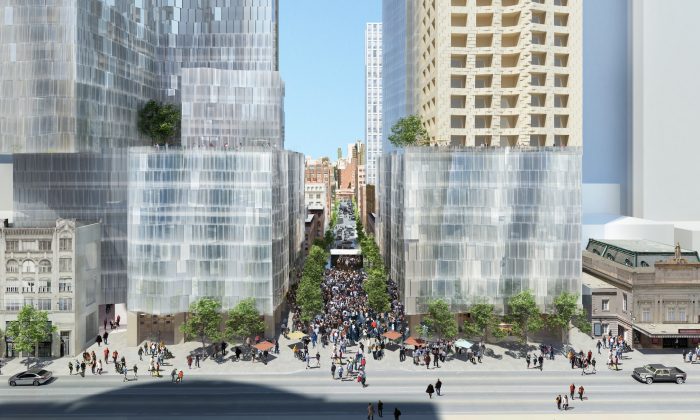 It isn’t every day that the country’s top realty brokerage firm shares its ruminations about Toronto’s buoyant, if not red hot, real estate market. According to Milborne Real Estate Inc.’s vice president, R. Scott Davie, there’s nary a sign the market will cool any time soon. On the contrary, it’s only going to keep searing.

The wherefore boils down to simple economics, Davie told The Epoch Times, as demand vastly outpaces supply. A confluence of land scarcity and substantial migration to the Greater Toronto Area is billowing prices in what’s looking less and less like the long-speculated bubble.

“I think we’re going to see that prices will be forced upwards because of an imbalance of supply and demand,” said Davie, noting that around 120,000 of Canada’s 250,000 new immigrants settle in the GTA every year. The plummeting Albertan economy—which has seen over 100,000 job losses in the last few months—will deter new Canadians from moving there, likely diverting them—not to mention resident Albertans—to the GTA and creating even greater demand for housing.

“What’s driving the market right now are the low-interest rates and migration to the GTA. Low interest rates will continue, and even if they were to go up as much as 2 percent, it won’t affect the market,” continued Davie.

“Many people who lost their jobs in Alberta will also come to Toronto, so the current economic climate will make migration to Toronto much greater than what’s already a very high number. This means demand will be even stronger and supply will still be short. You can’t help but have prices go up when the continued imbalance goes up too.”

With 12 to 15 percent of the market share, Milborne is the country’s top firm. It oversees a myriad of projects, the most remarkable of which might be Mirvish+Gehry Toronto, the 92-storey double-tower landmark slated to be built on King St. in Toronto’s downtown core. The mixed-use development will house 1,950 residential units and should propel Toronto into the world’s uppermost tier of cities.

“It’s the project of the decade,” declared Davie. “These two buildings will be a work of art. They’re going to be landmark buildings, at the level of something you’d see in Shanghai or Hong Kong or Dubai; buildings everyone is going to want to own and be a part of, so we’re looking forward to launching that this year.

“As the world comes to invest in Toronto, and has been for some time, it raises the profile of the city to have buildings of this caliber and brings attention to this city, helping Toronto be a first-tier city around the world rather than a second-tier city.”

Given how dramatically Mirvish+Gehry Toronto will alter a skyline already renowned for its vicissitude, Chinese buyers—whom Davie characterizes as Toronto’s savviest—will undoubtedly comprise a significant portion of its buying cohort.

One development that should have a heavy Chinese buying contingent is Unionville Gardens by Chinese builder, The Wyview Group. There’s no doubt Unionville Gardens will satisfy the Sino community’s high expectations. Davie says, in addition to competitive price points, it will be replete with superlative finishes.

However, according to Davie, Yu in Unionville by Ideal Developments is the project to watch for Chinese buyers, in part, because of its proximity to York University’s planned Markham campus.

“The Chinese community recognize the importance of being near first-tier universities, being near transit hubs, pricing and quality finishes,” said Davie.

Yet another project slated for high Chinese occupancy is The Kennedys by renowned international builder Samm Developments. In response to simmering demand for high-rises in the 401 and McCowan Rd. area by the Chinese community, The Kennedys, attached to an existing Delta Hotel, will do just that.

“We’ll be introducing very good quality units with competitive pricing,” said Davie. “The Chinese community recognizes good pricing, but quality at the same time, and we’ll meet that demand at The Kennedys.”

Davie calls Toronto fertile ground for overseas investors, particularly those in China, looking for a safe investment. Citing a sputtering Chinese economy and unpredictable government, Toronto is an ideal city in which to safeguard money.

“Another strong aspect of our market in Toronto is the international investor. Toronto has been a very welcome home for international investors because of stable government and laws governing condominiums in Toronto,” he said “Interest rates also benefit overseas buyers. Now that the Canadian dollar is so low, this will encourage investors from overseas to invest in Toronto’s preconstruction condominiums.”

Condo sales in 2015 were 11 percent over the 10-year average—the third best year in that span—and Davie expects Toronto’s condo boom to continue well into the future.

“Condos have overtaken low-rise housing as the dominant form of housing in the GTA, especially when it comes to preconstruction,” he said. “We broke the 50 percent mark three years ago. Last year, around 21,600 high-rise condos were sold.”