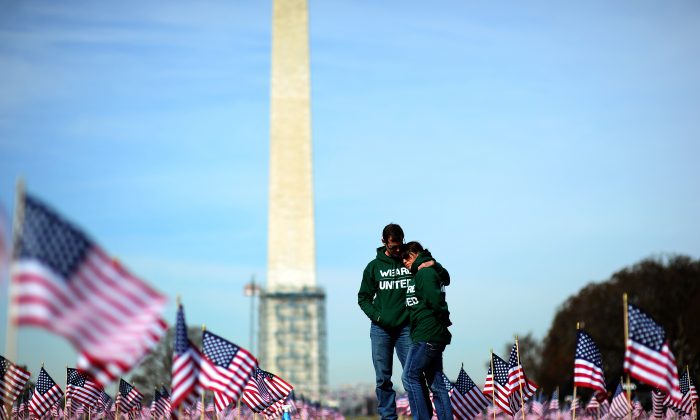 Colleen Ryan and Jeff Hensley, U.S. Navy veterans from the Iraq War, comfort each other as they help set up 1,892 American flags on the National Mall in Washington on March 27, 2014. The flags represent the 1,892 veterans and service members who died by suicide that year. (Jewel Samad/AFP/Getty Images)
Social Issues

The U.S. Department of Defense (DOD) announced May 17 that Gayle Iwamasa will lead the Suicide Prevention and Response Independent Review Committee, which addresses the issue of suicides in the American military.

Iwamasa has served as a national director in the Office of Mental Health and Suicide Prevention at the U.S. Department of Veterans Affairs since October 2020. She was a National Mental Health Quality Improvement and Implementation Consultant in the department for the prior 10 years.

According to the DOD announcement, Iwamasa will head a team of nine including an epidemiologist, a retired military chaplain, and experts in public health, substance abuse, and sexual assault and suicide.

“The committee members are in Washington this week to begin their work and in July they will start visits to the installations that were named in the onsite installation evaluation report back in March,” Pentagon Press Secretary John F. Kirby said during a briefing on May 17.

The DOD expects recommendations from the committee to be applied across all branches of the military. The first report is due to the secretary in December 2022 and the final reports are due to Congress in February 2023.

Iwamasa also worked as a psychology director in Logansport State Hospital, a psychiatric hospital in Indiana, from June 2008 to October 2010.

The Suicide Prevention and Response Independent Review Committee will work toward addressing and preventing suicides and, as part of that work, will visit military installations inside the country and overseas, interview individuals, and conduct confidential surveys of service members at the designated locations.

The committee is expected to produce reports that will detail actionable improvements to policies, programs, processes, and resources to prevent suicides in the military.

There were 24 deaths by suicide among reserve members in the same quarter, an increase of 5 from the prior year. In the National Guard, there were 23 suicide deaths, which was down by 18 deaths compared to the same period in 2020.

In his May 11 testimony before the House Appropriations Committee, Secretary of Defense Lloyd Austin said the DOD is deeply focused on the problem of suicide in the military.