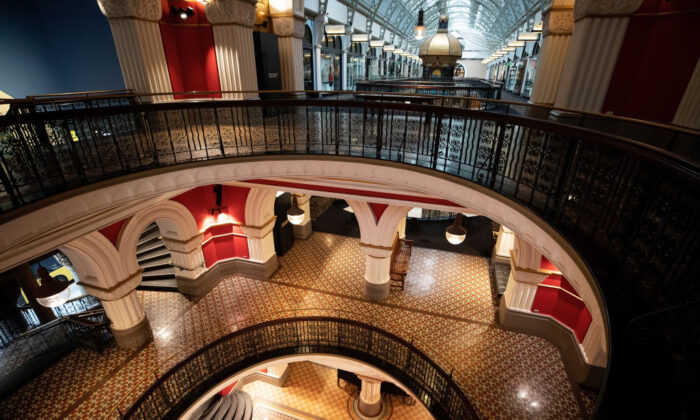 The interior of the Queen Victoria Building where retail stores are currently closed due to COVID-19 on April 1, 2020 in Sydney, Australia. (Cameron Spencer/Getty Images)
Australia

The revamped code, part of a larger package of rent relief policies, requests landlords to offer rent waivers and deferrals in line with their tenants’ decline in income during this downturn period.

A core principle of the new code is “proportionate and measured burden share” between landlords and tenants.

The provisions apply to commercial tenancies (including retail, office, and industrial) where the business is eligible for the JobKeeper programme and has a turnover of up to $50 million.

Under the scheme, landlords will have to reduce rents for their tenants in proportion to their drop in revenue resulting from lockdowns amid the CCP (Chinese Communist Party) virus, commonly known as the coronavirus. Landlords cannot evict tenants or draw on security deposits on the grounds of payment default either. And finally, landlords are obliged to negotiate with their tenants, or forfeit their way out of a lease. Likewise, tenants must also honour lease agreements.

The code will be legislated or regulated in each state and territory, and the new lease arrangement will be overseen by binding mediation.

The prime minister emphasized the importance of negotiation in good faith between landlords and tenants on a case-by-case basis, saying the code aims to bring together a set of good-faith leasing principles, in order to preserve the lease and the relationship, and to keep the tenant in the property.

He also urged banks and other lenders to support landlords and tenants with “appropriate flexibility.”

Negotiation in Good Faith Is Key

Scott Morrison urged commercial landlords and tenants to sit down and talk in late March, when he announced a six-month moratorium on evictions for both residential and commercial tenancies trapped in financial stress amid CCP virus shutdowns.

“Commercial tenants, landlords, and financial institutions are encouraged to sit down together to find a way through to ensure that businesses can survive and be there on the other side,” he said in a statement on March 29.

The prime minister reiterated the “sit down and talk” stand on April 3.

“What we want to do is have landlords and tenants in the room to ensure that they can work these issues out between them, so they can have an arrangement which enables them to get through this period and to get to the other side,” he said in the press conference.

“So there’s give and take on this, give and take, those tenants and landlords are being encouraged to sit around that table and get that done now,” he added.

More Needs to Be Done

The Property Council of Australia (PCA) welcomes the new code, saying it will work closely with state and territory governments on the detail of its implementation, but reminds Australians that there are a number of questions unresolved.

“We are pleased that National Cabinet has recognised that banks and financial institutions need to support commercial landlords with regard to their debt covenants. This is important,” said Ken Morrison, PCA chief executive in a statement on April 7.

“We are relieved that the risky idea of allowing tenants to terminate leases has been taken off the table. That would have been a dangerous precedent for our financial system,” he said.

However, he added that a number of changes need to be made to the code, including protection for small property companies, and the provision of land tax or stamp duty relief for landlords, saying the code asks commercial property companies to shoulder too much financial burden.

Over the last months, the economic impact of CCP virus shutdowns has thrown commercial landlords and tenants nationwide into uncharted territory. With most retailers and traders having suffered significant revenue loss due to shutdowns, landlords, who are also facing financial hardship, are under surmounting pressure to offer lease relief.

The Australian Bureau of Statistics (ABS) survey on business impacts of COVID-19 released on April 7, shows that almost half, or 47 percent, of businesses made changes to their working arrangements, including temporarily reducing staff or the introduction of remote working.

It also found that 2 in 5 businesses, 38 percent, have changed how they deliver products or services, including the transition to online services.