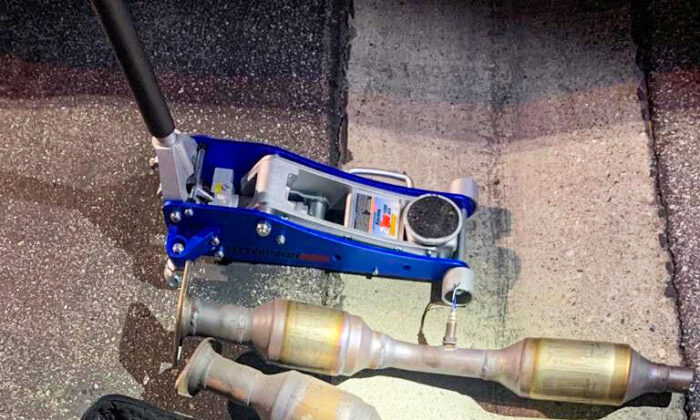 The Colorado Legislature has passed a bill seeking to address an alarming increase in catalytic converter thefts.

The law requires anyone who acquires five or more vehicles for spare parts within a year to report within five days to the national vehicle title information system.

According to the Colorado Theft Prevention Authority, thefts of catalytic converters that contain valuable commodity metals such as platinum rose 5,000 percent from 2019 to 2021.

The National Insurance Crime Bureau (N.I.C.B.) reports that catalytic converter thefts have increased significantly in the United States since the start of the global pandemic in March 2020.

Thefts On The Rise

“Vehicle thefts, carjackings, and break-ins are all crimes we’ve witnessed trending upward for several months. Now catalytic converter thefts are also on the rise,” according to N.I.C.B. president and CEO David Glawe in a statement.

“As the value of the precious metals contained within the catalytic converters continues to increase, so do the number of thefts of these devices. There is a clear connection between times of crisis, limited resources, and disruption of the supply chain that drives investors towards these precious metals.”

Platinum currently sells for $951 per ounce on the spot market, according to the precious metals website Kitco.com.

An ounce of Palladium, another commodity metal used in catalytic converters, goes for $2,014.

By February of 2021, 18 states were considering legislation to curb thefts.

“And for the vehicle owner, it’s costly due to the loss of work, finding and paying for alternate transportation, and then paying anywhere from $1,000 to $3,000 to get your vehicle fixed.”

Senate Bill 9 expands the scope of duties of a task force to include catalytic converter and commodity metals theft.

Colorado’s Senate Bill 179 provides civil penalties for catalytic converter thefts, including fines of up to $15,000.

Another bill, HB-1217, would require the Colorado State Patrol to develop an assessment report to determine compliance with commodity metal reporting requirements.

While insurance does cover theft of catalytic converters in some cases, policyholders are responsible for the deductible, the N.I.C.B. states.

“While lights may not provide complete security it may make some thieves think twice, making them leave the area and your vehicle untouched.”