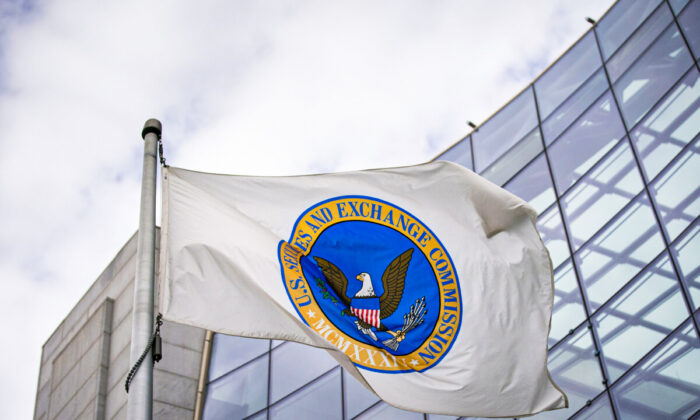 A flag outside the U.S. Securities and Exchange Commission headquarters in Washington, D.C., on Feb. 23, 2022. The SEC proposes a sweeping climate change disclosure rule that public companies must follow. (Al Drago/Bloomberg via Getty Images)
Viewpoints

It’s no surprise the Biden administration favors big government. But a new climate rule proposed by the U.S. Securities and Exchange Commission (SEC) takes Biden’s “whole of government” assault on our energy resources to a whole new level.

Under a new SEC rule proposed last month (pdf), all public companies would be required to disclose their greenhouse gas emissions and extensive information related to “climate risk.” This law will create a massive financial and productivity drain on businesses while contributing to the unscientific climate alarmist narrative and driving up energy costs even higher—hurting low-income and vulnerable communities the most.

The SEC claims the rule “will promote efficiency, competition, and capital formation.” Sounds positively pro-business—but nothing could be further from the truth.

The anti-fossil fuel movement on Wall Street known as environmental, social, and governance (ESG) investing is already strangling energy producers as banks and investment firms collude to deny them services. The oil, natural gas, and coal producers that give us the energy we need are increasingly struggling to access the capital they need to get to work. Endorsing this discriminatory investing movement will only worsen this critical problem, making it harder for America’s responsible energy producers to survive.

The Biden administration’s already long legacy of destructive anti-energy policies—including but not limited to promoting ESG—makes the federal government complicit in not only rising gas prices, but also in propping up hostile and unstable regimes that drill for oil carelessly, with shoddy environmental and human rights standards.

The American people have been conned on climate change. The false notion that our planet is racing towards its fiery doom—and that we’re almost out of time to stop it—is so pervasive that our children are saddled with unprecedented “eco-anxiety” and “chronic fear of environmental doom.” According to a recent survey, less than a third of teenagers are optimistic about Earth’s future.

But there’s plenty of good news on climate change. Over the last century, climate-related deaths have plummeted over 98 percent—even while the world’s population quadrupled and average temperatures have warmed slightly. Deaths due to weather-related disasters, which the media is always quick to blame on climate change, have declined at a faster rate than other disasters such as earthquakes and volcanic eruptions. And despite the hyped-up headlines, hurricanes haven’t worsened and wildfires and floods are actually on the decline.

If climate change is dooming us, why are we getting more resilient, not less?

Unfortunately, the SEC’s climate disclosure proposal will further muddy the waters and cement the radical climate movement in our society and our halls of government.

The American people deserve better. At a minimum, they deserve a federal government that respects the constitutional separation of powers. Our Founding Fathers gave Congress—not the president—the power to make laws for a reason: to ensure our elected representatives are accountable to the people. Forcing agenda-driven mandates down our throats through executive diktat allows no such accountability.

But the Biden administration believes it’s above such plebeian ideas. Its approach to federal regulation has given unelected bureaucrats nearly unlimited power to impose expensive and restrictive mandates on private citizens and businesses—even when those mandates will harm the vulnerable communities they claim to fight for.

Requiring businesses to assemble complex reports on their greenhouse gas emissions and “climate risk” is a bad move that will impose massive costs on businesses—money that could be far better spent by entrepreneurs on growing their businesses, creating new jobs, and investing in their communities. But more importantly, this rule sets a new precedent that’s an affront to our Constitution and our system of representative democracy.

If the Biden administration really wants to pursue this rule, it should do so honestly by working with Congress and respecting the legislative process.