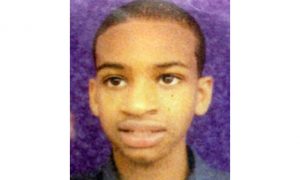 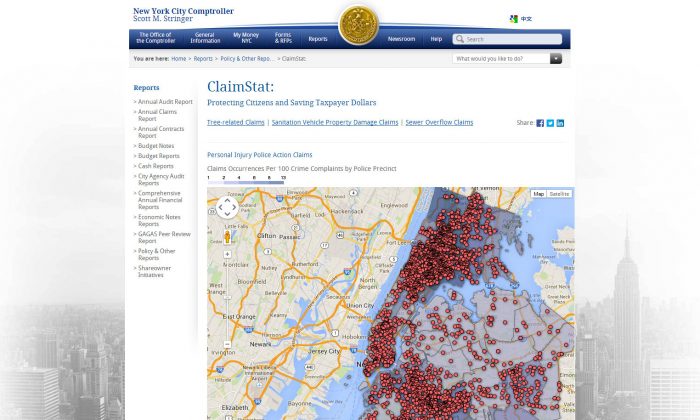 Police department has most expensive legal settlements
By Annie Wu

NEW YORK—The New York City comptroller’s office unveiled a new tool, ClaimStat, which will publish data on the thousands of legal claims made against the city every year.

Released Wednesday, the tool will help city agencies identify common problems within its purview and save money for taxpayers who ultimately foot the bill for settlements, the office said.

“ClaimStat will serve as an early warning system to help agencies improve services and make our city safer,” Comptroller Scott Stringer said in a press statement. “ClaimStat is a new, data-driven tool that will help to identify costly trouble areas before they become multimillion dollar cases.”

In fiscal year 2013, taxpayers paid $494.9 million for the city’s settlements involving property damage and personal injury—the latter, which makes up 98 percent of all the tort claims filed against the city. Another $200.6 million was paid for non-tort claims. Those include disputes about contracts between the city and its employees or contractors; and claims of overpaying taxes and fines.

The first installment of ClaimStat includes a full written report and interactive maps showing where and when legal claims against the city took place in the following areas: personal injury claims filed against the police department; tree-related claims; property damages due to sanitation department vehicles; and sewer overflow. For claims already settled, the maps include when it was settled and the amount of settlement money.

In second place for the most costly settlements was the city’s operator of public hospitals, the Health and Hospitals Corporation. Most claims were for medical malpractice, according to the comptroller office report. Kings County Hospital in Brooklyn had the most medical malpractice claims out of all city hospitals, with 88 in fiscal year 2013.

The report also found that communities in East Brooklyn and the west coast of Staten Island were disproportionately affected by flooding, based on sewer overflow claims made against the Department of Environmental Protection. As for the Department of Sanitation, property damage claims due to accidents with sanitation trucks were the highest on Staten Island.

The comptroller’s office said it will be analyzing data from other city agencies in the coming months and publish the results on a “periodic basis,” while continuing to monitor trends in the agencies featured in the first report. At press time, the comptroller’s office did not respond to questions clarifying how often it plans to release data findings via ClaimStat.

$695.5 million
Total amount taxpayers paid for settlements and judgements from lawsuits brought against the city in fiscal year 2013

9,502 claims
Total number of new claims against the NYPD in fiscal year 2013

Over $80
Cost per city resident