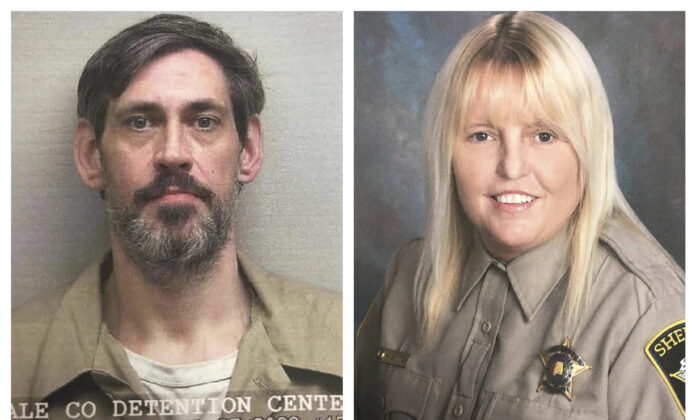 Authorities have filed new charges against an Alabama corrections officer who is believed to have fled with a murder suspect last month.

The Lauderdale County Sheriff’s Office on Monday said that Vicky White, the officer, has been charged with forgery and identity theft, stemming from her purchase of a 2007 Ford Escape that was allegedly used in the escape. Deputies told News19 that she used an alias to purchase the vehicle.

Lauderdale County Sheriff Rick Singleton told Monday that “if she was using her own identity, that would make it fairly easy for us to maybe find her,” adding, “We do know she used a false identification to purchase a car here locally.”

“She had two false IDs that we’re aware of, and I wouldn’t be shocked if she had additional or new ones now,” the sheriff said.

A warrant has been issued for Vicky White, 56, charging her with permitting or facilitating escape in the first degree in connection with capital murder suspect Casey White’s escape from jail: https://t.co/9Lx6DHM6PC pic.twitter.com/hULhU1g1QR

White was charged last week with a felony for permitting or aiding an escape. She is accused of helping murder suspect Casey Cole White, who was serving time for a slew of felony charges, escape prison. The pair’s whereabouts are currently unknown, and officials say they should be considered armed and dangerous.

Last week, officials suggested that the two, who are not related, developed a romantic relationship.

Singleton told media outlets that Vicky White was seen shopping for men’s clothes at a store prior to when the two went missing. Meanwhile, investigators are concerned that Cole White could become “extremely violent” without his medication, Singleton said, without elaborating on what medication it is or what he’s being treated for.

“He has some issues that he’s on medication for, and when he’s off his meds, I’m told he can be extremely violent,” Singleton told CNN, adding that it’s for “controlling [his] temper and those kinds of things.”

Casey White was facing two counts of capital murder in the alleged stabbing homicide of a woman in 2015, according to the U.S. Marshals Service. The Service is offering up to $10,000 for information leading to the capture of Casey White and $5,000 for Vicky While, while Alabama Gov. Kay Ivey announced additional rewards of $5,000 each.