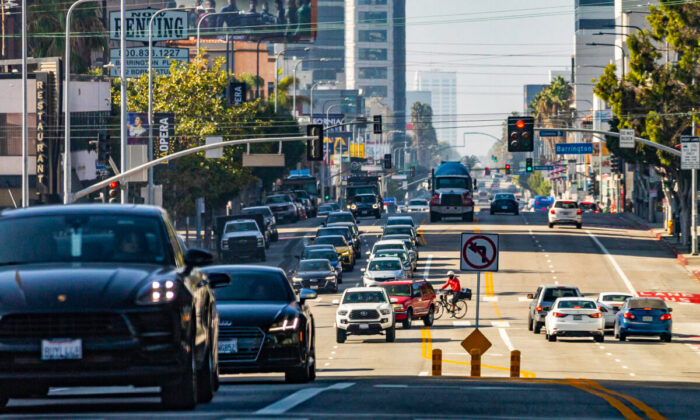 LOS ANGELES—While thousands of Californians have been fleeing the state for the lower cost of living found in other states, others are leaving large cities, such as San Francisco and Los Angeles, to the quieter suburbs found in the Inland Empire.

San Bernardino and Riverside counties, adjacent to the state’s coastal towns, have seen an influx of both families and single residents from large cities since the start of the COVID-19 pandemic because of factors such as high rent costs.

According to new census data, both Los Angeles and San Francisco saw significant declines in population during the first year of the pandemic. In 2021, counties with net international migration loss, or more people moving out of than into the United States, were more frequently found in California than in other states, according to the research.

“The patterns we’ve observed in domestic migration shifted in 2021,” Christine Hartley, assistant division chief for estimates and projections in the Census Bureau’s Population Division, said in the March 24 report.

“Even though over time we’ve seen a higher number of counties with natural decrease and net international migration continuing to decline, in the past year, the contribution of domestic migration counteracted these trends, so there were actually more counties growing than losing population.”

The average cost of rent in Los Angeles is around $2,660, while San Francisco’s average cost is $3,230, according to Rent Café, an apartment listing service.

Riverside-based real estate agent Stephanie Janeshak told The Epoch Times that “the vast majority of folks that come through my open houses are coming from L.A. County—probably 70 to 80 percent of open house visitors.”

Beaumont resident Bill Gray said, “There is a definite move away from the big city,” especially with housing prices in Orange and Los Angeles counties, coupled with “the new move toward working from home. You certainly wouldn’t think California is losing people if you look around here.”

Los Angeles resident Allison Rogers, 32, said the city’s quality of life appears to be falling. Rogers, who moved to the city when she was 23, has noticed a significant difference over the years, and because of the cost of living, she said she’ll never be able to afford a home in the city.

“It’s just really difficult to enjoy life in L.A. because you go to the park, there’s a homeless person, or you go here and there’s an RV camp parked on the side of the road doing crack cocaine—you just don’t know what people are up to,” she told The Epoch Times.

Rogers said she’s one of thousands of California natives who plan to move by the end of the year, although she’s uncertain of where she’ll go next.

While she said she considers herself to be in one of the “last good neighborhoods” in Los Angeles, right outside of Beverly Hills, she has still noticed an increase in crime happening in broad daylight.

“There’s attempted carjackings in broad daylight at 2 p.m. in Beverly Hills, like it’s just not L.A. anymore,” she said.