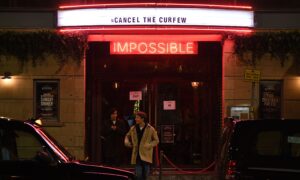 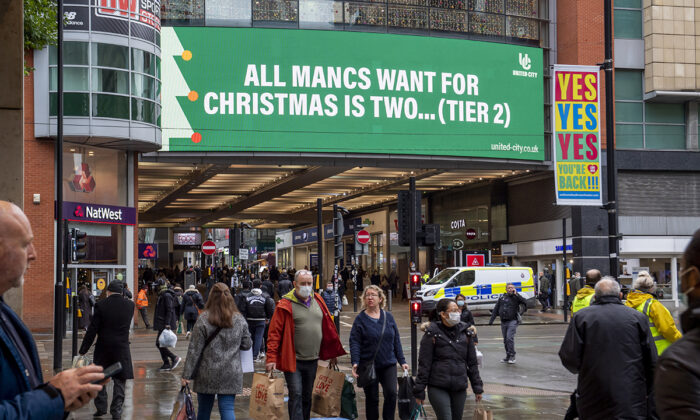 New restrictions aimed at limiting the possible spread of the CCP virus came into effect across England on Dec. 2 as the country’s latest national lockdown ended.

The three-tier system, which places different parts of the country under differing degrees of restrictions, is a preemptive measure aimed at preventing the country’s health service from being overwhelmed during the winter months.

The three tiers will see rules on face coverings and limitations on gatherings continue, but non-essential retail and international travel can resume.

Tier 1 (medium alert) sees a return to live entertainment, with both indoor and outdoor venues able to operate with 50 percent capacity or an attendance of 4,000 outside or 1,000 inside, depending on which is the lower figure. Hospitality venues are also allowed to open but must shut by 11 p.m.

Only the Isle of Wight, Cornwall, and the Isles of Scilly are in Tier 1.

Tiers 2 and 3 (high and very high alert) both see restrictions on who can meet indoors; gatherings outdoors in Tier 2 are limited to the “rule of 6,” meaning no more than six people may meet up, but Tier 3 has restrictions on meeting people in almost all outdoor places.

According to the Telegraph, under the current model, some 55 million people or 99 percent of the English population have been placed either into Tier 2 or Tier 3, the harshest tiers.

The new restrictions were passed in the House of Commons on Dec. 1 with a vote of 291 to 78, with 55 Tories rebelling. A further 16 abstained. It is seen as the largest rebellion from within the Conservative Party that Boris Johnson has had to face since becoming prime minister in 2019.

Johnson has come under pressure recently both from within his own party and from opposition to publish the scientific data justifying the government’s decisions as well as the long-term economic and social impact of repeated restrictions.

He pledged a further £40 million for some pubs within the Tier 2 and 3 areas, adding that he would look at the tiers in “granular detail” when they are next reviewed on Dec. 16.

The new restrictions come as the UK has seen two of its largest retailers, the Acardia Group and Debenhams, struggle under the current economic climate.

The Arcadia Group, which owns Topshop, Burtons, and Dorothy Perkins, announced its collapse this week, putting 13,000 jobs at risk.

Likewise, Debenhams, which employs 25,000 staff, announced this week it had failed to find a buyer for the company after going into insolvency earlier in the year, putting all of its staff at risk.