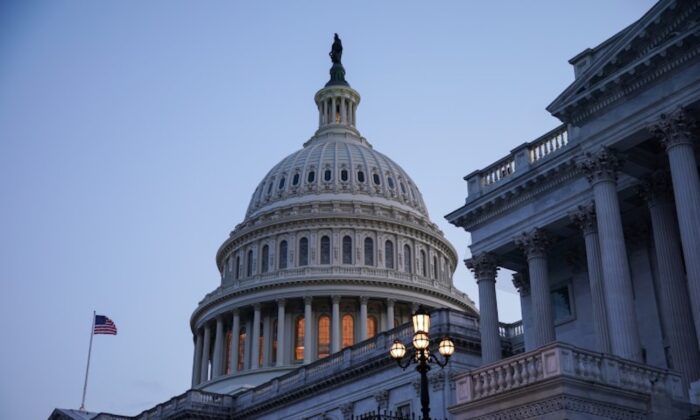 The U.S. Capitol in Washington on Aug. 8, 2021. (Reuters/Sarah Silbiger)
Congress

“On Thursday, Sept. 9, 2021, and Friday, Sept. 10, 2021, at 10:00 a.m., the committee will mark up measures spanning from universal paid family and medical leave and access to child-care to strengthening retirement savings and trade programs that prioritize American workers,” the committee said in a statement.

“This is our historic opportunity to support working families and ensure our economy is stronger, more inclusive, and more resilient for generations to come,” Neal said in the statement.

What followed in the statement were 16 promises to create new benefits, greatly expand existing ones, and increase funding for a host of federal programs targeted by Biden to combat global warming, the CCP virus (also known as the novel coronavirus), the affordable housing shortage, and homelessness, among many other issues.

Other Democratic committee chairmen who head panels with mark-up roles on the spending plan are following similar paths. The fact that virtually all House members are back home in their districts on recess and won’t return until Sept. 20 is just one of a host of problems Democratic leaders must confront.

Much of the markup work will be done via virtual committee meetings.

The biggest of the problems, however, are likely to be Sen. Joe Manchin (D-W.Va.) and Sen. Kyrsten Sinema (D-Ariz.). The Senate is split 50-50 between the parties, meaning Democrats have no margin for error in counting votes. The House is only slightly more favorable to Democrats, with a 221–213 margin, meaning Speaker of the House Nancy Pelosi (D-Calif.) can lose no more than four votes.

Manchin and Sinema have both expressed reservations about the massive spending and expansion of government in the $3.5 trillion Biden plan. Lose either one, and Vice President Kamala Harris (D-Calif.) is no longer the Senate’s tie-breaking vote for Democrats unless at least one Republican crosses the aisle.

The next big obstacle is how to pay for the biggest expansion of federal spending since the Great Society in the 1960s at a time when inflation is increasing, employers can’t find workers, small and medium-sized businesses are struggling to stay afloat, and only one in three Americans thinking the country is headed in the right direction.

Republicans such as Rep. Kevin Brady (R-Texas), the ranking minority member of Neal’s committee, sees nothing but bad economic news being generated by the Biden plan, especially in the area of tax increases.

Brady issued a scathing statement just before the Labor Day weekend, in which he predicted Democrats will have to raise taxes on middle- and lower-class taxpayers due to the Biden plan.

“The Joint Committee on Taxation says that within 10 years of a corporate tax increase, 66.3 percent of the corporate tax burden would be borne by lower- and middle-income taxpayers.

“Studies show that the capital gains tax alone would shrink the economy, and the left-leaning Tax Policy Center finds that Biden’s proposal raises taxes far past the amount necessary to maximize revenue. Past analyses by the Congressional Budget Office and the Joint Committee on Taxation agree.

“Democrats’ second death tax will destroy more than 1 million jobs over the next 12 years, slash paychecks for workers, and shrink our economy by $100 billion over the next decade.”

If Democrats don’t raise taxes and choose instead to fund the new spending with bigger deficits, they will add an estimated $4.3 trillion to the national debt that now approaches $30 trillion, according to the Committee for a Responsible Federal Budget. That estimate includes the $1.1 trillion infrastructure bill that’s a companion to the spending plan.

In such a scenario, there is no guarantee that Democrats will be able to force through Congress an increase in the national debt ceiling by Sept. 30, the end of the current fiscal year.

Democratic campaign strategists know that a contracting economy with spiraling consumer prices and fewer jobs being created could move voters to restore Republican control of either or both chambers of Congress in November 2022.

Then there is the planned Sept. 18 protest demonstration at the Capitol in support of the Jan. 6 detainees being organized by a group known as Look Ahead America (LAA), which is led by former Trump campaign strategist Matt Braynard.

The LAA has previously organized protests that included a few conservative Republican House members, but multiple senior House Republican aides speaking on background told The Epoch Times they don’t expect any to be present for the Sept. 18 event.