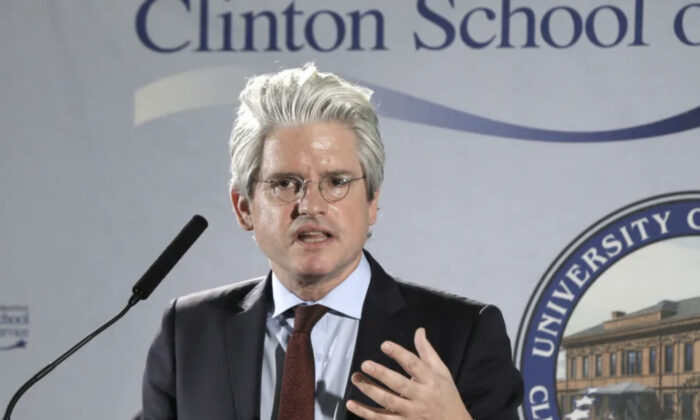 A longtime Hillary Clinton ally’s new cancel-culture group announced that it plans to spend millions of dollars to disbar 111 lawyers in 26 states who defended the Trump campaign in post-election litigation, or were involved in efforts to challenge the 2020 presidential election results.

According to an Axios report, The 65 Project, founded by longtime Democratic Party operative David Brock, has begun filing bar complaints against attorneys and plans to run ads in battleground states, including Arizona, Georgia, Michigan, Nevada, Pennsylvania, and Wisconsin. The group also intends to lobby the American Bar Association and state bar associations to create rules forbidding some election challenges, and to adopt model language stipulating “fraudulent and malicious lawsuits to overturn legitimate election results violate the ethical duties lawyers must abide by.”

Brock, an erstwhile conservative journalist who switched sides and became a fundraiser for Democrats, founded Media Matters for America and the American Bridge 21st Century super PAC. The “65” refers to the number of lawsuits the group claims were filed that were aimed at invalidating the 2020 election results.

Brock told Axios the purpose of The 65 Project is to “not only bring the grievances in the bar complaints, but shame them and make them toxic in their communities and in their firms.”

“I think the littler fish are probably more vulnerable to what we’re doing,” he said. “You’re threatening their livelihood. And, you know, they’ve got reputations in their local communities.”

The article states that the project “hopes to deter right-wing legal talent from signing on to any future GOP efforts to overturn elections—including the midterms, or 2024.” The group is the brainchild of Melissa Moss, a Democratic consultant and former senior Clinton administration official.

Although the media outlet reports that the group intends to spend around $2.5 million in its first year, and will operate through an existing nonprofit called LawWorks, The 65 Project’s website is asking for donations to be made to it through another nonprofit, Franklin Education Forum, which provides debate and media training for left-wing activists.

Texas lawyer Paul M. Davis, who is being targeted by The 65 Project, told Axios the group’s effort “is nothing more than a desperate attempt by leftist hacks and mercenaries.”

Three attorneys contacted by The Epoch Times were critical of The 65 Project to varying degrees.

High-profile attorney Sidney Powell, who is appealing sanctions imposed on her by a federal judge for filing a supposedly frivolous election-related lawsuit, said The 65 Project is “unconstitutional, un-American, abusive, and hateful.”

Referring to Brock, she said by email: “I can’t even imagine how soulless and sick he and his comrades have to be to dedicate themselves and millions of dollars to try to destroy the lives and livelihoods of others. Those dollars could be spent instead to build Habitat homes or shelters for the homeless. Brock and his ilk don’t solve problems; they create them. Pathetic.”

In an interview with The Epoch Times, Curt Levey, president of the Committee for Justice, said, “The election is over.”

Brock is “doing this just to destroy the lives of the attorneys who defended Trump,” but “everyone, even people that David Brock hates, deserves vigorous legal representation.”

“It is certainly at odds with both the First Amendment and the right of all Americans to have legal representation. It’s just bully tactics” and “a particularly vicious streak of cancel culture,” Levey said.

The nonprofit describes itself as “devoted to restoring the Founders’ vision of a federal judiciary governed by the rule of law and anchored by the Constitution.”

Former Department of Justice civil rights attorney J. Christian Adams told The Epoch Times by email that, on the one hand, The 65 Project is “another reason not to get involved with flimsy legal theories, and only bring cases with merit.”

On the other hand, “it shows the Left is swimming in so much cash that they can implement any thuggish program they choose to,” said Adams, who is president of the Public Interest Legal Foundation (PILF).

The foundation describes itself as “the nation’s only public interest law firm dedicated wholly to election integrity.” The nonprofit organization “exists to assist states and others to aid the cause of election integrity, and fight against lawlessness in American elections.”

The 65 Project website highlights the bar complaints it has filed so far against pro-Trump lawyers for their involvement in post-election lawsuits or activities.

Meanwhile, Hillary Clinton campaign lawyer Marc Elias is leading a related effort to disqualify Republican candidates for allegedly supporting an insurrection against the United States by backing then-President Donald Trump in congressional votes at the end of the 2020 election cycle. Those challenging the candidates cite an obscure post-Civil War constitutional provision intended to keep Confederacy supporters from public office.

So far, allies of Elias have tried to have two pro-Trump Republican congressmen kicked off the ballot for voting not to certify the electoral votes of Arizona and Pennsylvania during a joint session of Congress on Jan. 6 and Jan. 7, 2021. During the session, U.S. Capitol security was breached and the disturbance delayed certification of then-candidate Joe Biden’s election victory by several hours. Some of those activists who entered the Capitol are being prosecuted for attempting to obstruct an official proceeding. Some of those held in pretrial detention in the D.C. jail have complained of beatings and torture by guards.

The effort to remove Rep. Jim Banks (R-Ind.) by invoking the disqualification clause of the 14th Amendment was unanimously rejected on Feb. 18 by the bipartisan Indiana Election Commission, as The Epoch Times reported. The challenge to the candidacy of Rep. Madison Cawthorn (R-N.C.) is pending. More candidate challenges are expected.

Elias is a central figure in the “Russiagate” conspiracy. He represented the Democratic National Committee and Clinton’s 2016 presidential campaign, hiring Fusion GPS to conduct opposition research against then-presidential candidate Donald Trump. That research effort culminated in the now-discredited 35-page dossier written by former British spy Christopher Steele that purported to tie Trump to the Russian government.

Brock, through his Media Matters for America website, which purports to combat “conservative misinformation,” has promoted the Trump–Russia conspiracy theory and Clinton for years. Funded by left-wing financier George Soros, Media Matters has, in turn, funded the Franklin Education Forum.