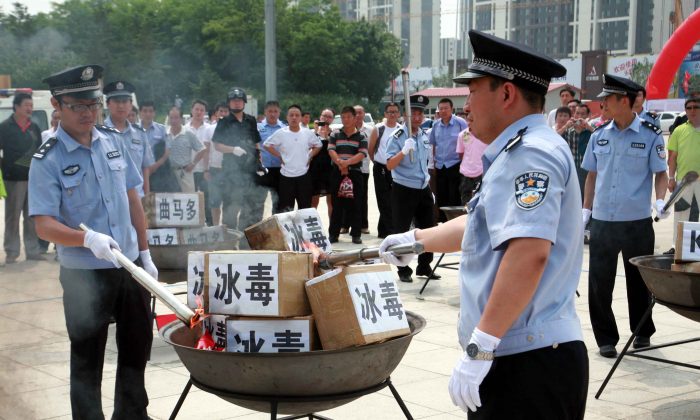 Policemen prepare to incinerate drugs on the International Day Against Drug Abuse and Illicit Trafficking on June 26, 2012 in Shenyang, China. Drug use in China has rapidly increased over the past two years, according to the Ministry of Public Security. (ChinaFotoPress/Getty Images)
China

New Campaign Responds to Growing Drug Use in China

Beginning in October, China launched an anti-drug campaign in 108 cities in 26 provinces.

Drug crimes and drug addicts have been increasing in China in recent years. During the current campaign, 12 tons of drugs have been seized, which is over 38 percent more than was seized during the same period last year, a Ministry of Public Security official said in a press conference on Nov.18.

The increase this year follows a previous increase last year. In 2013, China uncovered 15,000 drug crimes throughout the year, arrested 16,800 suspects, and seized various drugs weighing 44 tons, 31 percent more than the amount seized in 2012.

“Drugs are flooding in all walks of life, different classes and different groups in our society,” said Liu Yuejin, director of Ministry of Public Narcotics Control Bureau and Public Security assistant minister, on the press conference.

“Drug abuse has become an unspoken rule and an accredited value in many industries and special circles. This is very terrifying,” Liu said.

The Ministry of Public Security (MPS) data shows that China has 2.6 million drug addicts recorded in the public security system by April, however, the MPS estimated that the unregistered drug addicts may reach over 10 million people, according to state-run China Radio International (CRI).

Since last year, China has arrested a number of well known celebrities including Kung Fu star Jackie Chan’s son, Jaycee Chan, detained for a drug case this August in Beijing. These high profile arrests have raised public attention on the issue of drug abuse in China.

The population of drug addicts has become younger, with more synthetic drugs abused in recent years, such as methamphetamine, ecstasy and K powder, the report says.

Many of the drug cases have been discovered at public entertainment and service places, such as karaoke lounges, ballrooms, bars, saunas, and massage parlors, the state news media says.

Liu indicated at the press conference that both domestic and foreign drug crimes are happening rampantly in China. Liu said Chinese police are trying to cooperate with neighboring countries to launch joint investigations and seizures of drugs.