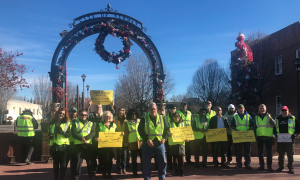 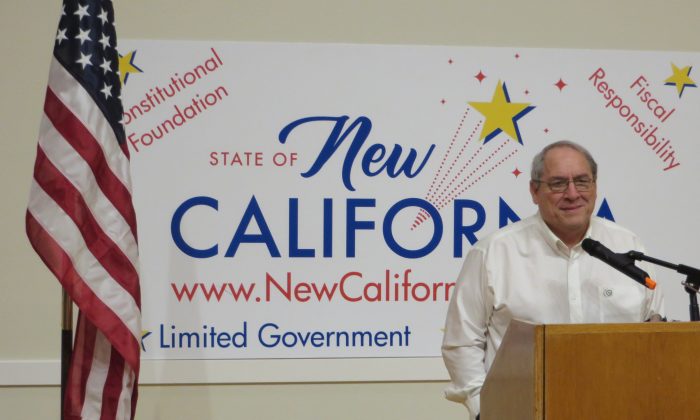 ROCKLIN, Calif.—Over 60 Placer County activists for the New California State movement joined a town hall meeting on the evening of May 8, criticizing the state’s high taxes and push towards socialist policies.

The New California movement is a statewide grassroots effort to break most of California’s rural areas away from the current state, forming a new state. So far, representatives from 47 of the 58 counties in California have joined the movement. Fractions of 5 other counties have also joined.

The movement claimed its independence on Jan. 15 last year and claims to be following a constitutional process similar to what West Virginia followed in breaking away from Virginia in 1861.

Paul Preston, the founder and president of the movement, explained that the claim of independence was a public notification process to inform the public that they started the constitutional process of forming the new state.

California had the highest personal income tax rate in the United States in 2018 at 13.3 percent, according to TurboTax.

Wyluda said that many functions of the agencies that charge fees under different names overlap, causing residents to sometimes pay multiple fees for similar services.

A threefold pamphlet passed around at the meeting bore a quote from Thomas Jefferson: “I predict happiness for Americans if they can prevent the Government from wasting the labors of the people under the pretense of taking care of them.”

The pamphlet also stated that the New California will target a sales tax of 5.2 percent.

California has the nation’s highest sales tax base rate of 7.25 percent, according to the Tax Foundation, an independent tax policy nonprofit. The total local sales tax can go as high as 10.5 percent (the rate in Santa Fe Springs in Los Angeles County), according to a report from the California Department of Tax and Fee Administration.

“The interpretation of the constitution really changed after the Civil War,” said Donald Wilson, a historian and the author of “St. Andrew’s American Revolution,” at the event.

He said in a speech that many people who were against Adolf Hitler turned around to support the European Union, but the ideas for a unified Europe were first proposed by the Nazi government in 1941.

“Because we know so little about World War II, we forget that national socialism is [what] Nazi stood for,” said Wilson.

He said that the evils of national socialism were not the “national” part, but the “socialism” part.

He said the U.S. border is important for protecting the culture, liberty, and independence of the United States. He also believes that Lenin, Stalin, and Hitler were part of a continental European tradition that started with Alexander III of Macedon, also known as Alexander the Great, in ancient Greece.

“Make no mistake about it, we [Americans] came here not to be Europeans,” he said.

Wilson said that’s why the U.S. government was designed to have separation of powers. The founding fathers wanted to establish the rights of people, not the rights of government.

In his speech, Wilson said that the people can override a president’s veto and amend the constitution. In the worst case, when a tyrant is out of control, people will have the power to throw out the tyrant, he said.

“That is what the Second Amendment is about,” Wilson said.

“We follow the Constitution Article IV Section 3 and Section 4, and we follow Article VI. We also follow the Declaration of Independence, and we follow the Bill of Rights,” said Preston when describing the process of establishing a new state from an existing state.

Article IV Section 3 of the U.S. Constitution specifies the process of establishing a new state from an existing state.

Article IV Section 4 guarantees a republican form of government in every state and protects each state against invasion and domestic violence.

Preston said that the 1964 Reynolds v. Sims Supreme Court case destroyed the republican form of government on the state level, but the New California state movement will have the first opportunity to use the 10th Amendment to challenge the case.

The U.S. Supreme Court ruled in the Reynolds v. Sims case that, unlike in the elections of the U.S. Senate, state electoral districts must be roughly equal in population. The ruling changed the forming of State Senate districts from a regional-based model to a population-based model.

That decision has caused urban areas with denser populations to gain more representation in state legislatures.

There are 40 State Senate districts in California. As an example of the result of the case, District No. 1 represents nine full counties and two partial counties in mostly rural areas, while Los Angeles County is represented by 14 Senate districts.

The main reason for the New California state movement is that the rural areas of California are underrepresented in the state legislature. The movement has reflected one of the major causes of the American Revolution: no taxation without representation.

The 10th Amendment of the Constitution reserves the powers not delegated to the federal government to the state-level governments and people.

Since the movement expects to establish the first new state since the Reynolds v. Sims case, the 10th Amendment will be handy for the new state to challenge the 1964 Supreme Court case using the new state’s own constitution.

The new state would also take over the entire national border currently belonging to California. Using Article IV Section 4, which protects states against invasion, the movement aims to meet the challenges of the current border crisis.

In order to establish the new state, the movement has to overcome some difficulties. The U.S. Constitution requires that the formation of a new state from an existing state must be approved by the legislature of the existing state. What motive the California legislature would have for lettings the rural areas form a new state is not clear.

In addition, the U.S. Senate must approve the forming of the new state. Doing so would likely require 60 votes to bring the matter before the Senate for a vote. This would require, as the Senate is currently constituted, several Democrats to vote to create a new, likely Republican, state and to diminish the electoral power of California, which gives their party a significant advantage in presidential contests.

These difficulties are often brought up at New California meetings, but the movement continues to grow in membership.

Paul Taylor is one of the main leaders of the New California movement. He was a U.S. Senate candidate in 2018.

Taylor, who is retired as a successful businessman, wants the new state to be innovative and business friendly. He said that the new state will be a right-to-work state with much less regulatory restrictions on businesses.

The right-to-work law refers to state laws that prohibit union security agreements between companies and labor unions. The U.S. Supreme Court in 2018 held five-to-four that non-union government workers cannot be required to pay union fees as a condition of working in public service, citing the workers’ First Amendment rights.

Taylor said he is a Christian constitutional conservative nationalist who believes the divine should inspire great governance.

“The government shall rest on the shoulders of Jesus Christ,” he said.

Taylor emphasized that the movement welcomes all people of different faiths who respect the values of America first, the U.S. Constitution, and traditional family values.