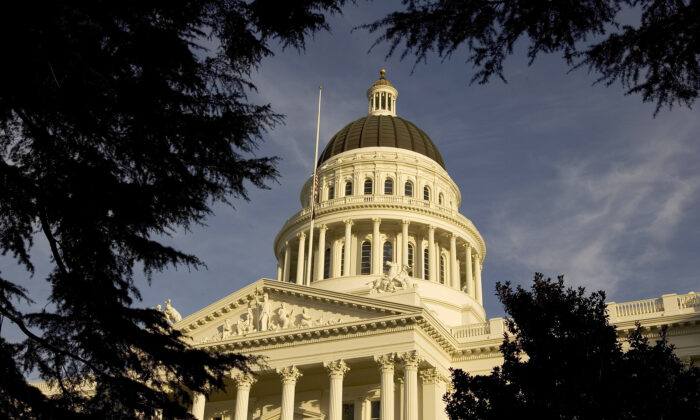 An exterior of the state capitol is shown in Sacramento, Calif., on Jan. 5, 2006. (David Paul Morris/Getty Images)
Southern California

Assembly Bill 218 increases the statute of limitations on reporting childhood sexual assault by 14 years—from the time an alleged victim is 26 years old to age 40—and extends the period for delayed reasonable discovery claims from three to five years. It also allows a window of three years for the revival of past claims that might have expired due to the statute of limitations.

The bill, authored by Assemblywoman Lorena Gonzalez (D-San Diego), was passed by the California State Assembly with a 69–0 vote and by a 33–0 vote in the state Senate. It was signed into law by Gov. Gavin Newsom on Oct. 13.

“The idea that someone who is assaulted as a child can actually run out of time to report that abuse is outrageous,” Gonzalez said in a media release. “More and more, we’re hearing about people who were victims years ago but were not ready to come forward to tell their story until now. We shouldn’t be telling victims their time is up when in reality we need them to come forward to protect the community from future abuse.”

Gonzalez introduced the legislation following allegations of the sexual abuse of minors by Catholic priests and after Larry Nassar, former U.S. Olympic gymnastics team doctor, was sentenced to life in prison in January 2018 for sex abuse crimes committed against young female athletes over a span of two decades. More than 250 women and girls testified in court against Nassar.

“Childhood sexual abuse continues to ruin children’s lives and continues to shock the nation because, unfortunately, perpetrators continue to abuse, often with impunity, and sometimes with the help of third parties who either choose not to get involved or actively cover-up the abuse,” according to the Sept. 14 Assembly Floor Analysis of the bill. “Whether the abuse occurred through gymnastics, swimming, school, or a religious institution, too many children have been victims of abuse and their lives have been forever impacted by that abuse.”

In cases where a child is sexually assaulted, AB-218 also allows courts to award damages to the victim from anyone found guilty of engaging in the cover-up.

“This reform is clearly needed both to compensate victims who never should have been victims—and would not have been if past sexual assault had been properly brought to light—and also as an effective deterrent against individuals and entities who have chosen to protect the perpetrators of sexual assault over the victims,” Gonzalez said in comments included in the bill analysis.

In support of the bill, the Victim Policy Institute stated that under previous laws, too many abusers avoided accountability for their actions.

“The only good thing to come out of recent scandals was an environment that encouraged well-known women—actors or Olympians—who were victims of childhood sexual assault to come forward,” the group stated in its supporting arguments. “It is time for the law to recognize what we all now know—that it can take decades before some survivors are capable of coming forward. Children being assaulted today may not be ready to come forward until decades in the future.”

The California Civil Liberties Advocacy (CCLA) opposed the bill, contending that it will “negatively impact civil defendants because the availability and reliability of evidence diminishes over time.”

CCLA also said in written arguments that extending the statute of limitations in civil suits is “more in the interests of the plaintiffs’ lawyer industry than that of the abuse survivors, in which the negative effects will be felt in the decades to come.”

This bill was also opposed by public and private school officials, insurance associations, and other groups over concerns that “it is very difficult to defend against old claims when records and witnesses may be unavailable, insurance may no longer be available, and the cost of defending these actions could be astronomical and could prevent the impacted entities from being able to support their main work,” according to the bill analysis.

Opponents specifically called for the elimination of the treble damages provision, the revival period, and limitations on liability for third parties.

The treble provision in the bill states, “A person who is sexually assaulted and proves it was as the result of a cover up may recover up to treble damages against a defendant who is found to have covered up the sexual assault of a minor, unless prohibited by another law.”

Earlier this month, Newsom signed another law, AB-1510, which gives potential plaintiffs more time to file lawsuits for damages stemming from sexual abuse allegations against George Tyndall, a former University of Southern California gynecologist. Tyndall, who was arrested in June, has pleaded not guilty to charges of sexually abusing 16 former patients during examinations over the last decade at the USC campus clinic. He has denied any wrongdoing amid hundreds of misconduct complaints against him.

AB-1510, approved Oct. 2, gives alleged victims a year to decide whether or not to sue for alleged “sexual assault or other inappropriate contact, communication, or activity of a sexual nature by a physician occurring at a student health center” between Jan. 1, 1988, and Jan. 1, 2017.