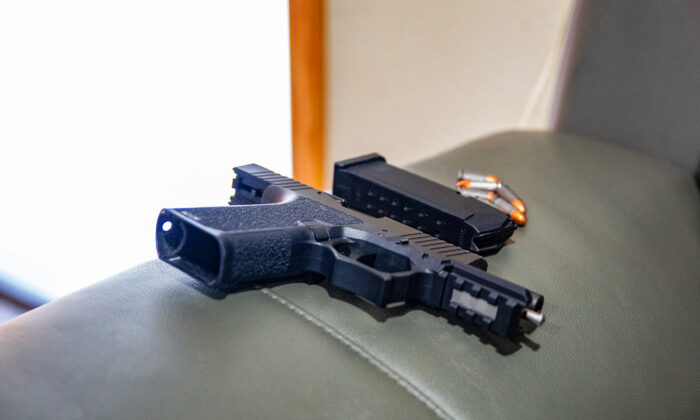 A firearm is confiscated by police officers in Westminster, Calif., on May 10, 2022. (John Fredricks/The Epoch Times)
Viewpoints

Like all of you, I’m horrified at the Tuesday killing of 19 children and two teachers at an elementary school in Uvalde, Texas. But it’s also upsetting politicians so quickly turn the families’ grief into a chance to score political points.

President Biden certainly did so this week in his address to the nation. He began with a heartfelt lamentation from losing two children of his own. Then it was if a switch was flipped, and he went all-out partisan against those who oppose “commonsense gun legislation,” which he never defined.

California politicians naturally are getting into the act. Gov. Gavin Newsom tweeted, “Another shooting. And the GOP won’t do a damn thing about it. Who the hell are we if we cannot keep our kids safe. This is preventable. Our inaction is a choice. We need nationwide, comprehensive, commonsense gun safety NOW.” Notice he also didn’t provide any details.

The fact is America has 400 million guns. How are Biden, Newsom and others going to take them away? Or get them all registered? They couldn’t. You would have to set up thousands of special punitive units to go around, barge into people’s homes without warrants and search for guns. There would be massive resistance by tens of thousands of people whose pickups sport bumper stickers reading, “I’ll give you my gun when you pry it from my cold, dead hands.”

It’s also now easy to make 3D “ghost guns,” as the gun controllers call them. Biden, Newsom and California legislators are trying to make it harder to make them. But like other technology, 3D printers are getting better and cheaper every year.

Uvalde is 70 miles east of the border with Mexico. The murder rate there is 15 per 100,000 people, three times the rate of 5 for the United States. And Mexico imposes almost total gun control.

Meanwhile, Biden has opened our border with Mexico, allowing in the drug cartels and other criminals, the fentanyl that’s killing more than 100,000 Americans a year, and who knows how many illicit guns. Instead of controlling the border, he wants to control Americans.

Newsom also tweeted, “Commonsense gun safety laws work. In CA, we have cut our gun death rate in half since the 1980’s. We won’t solve this overnight—but let’s stop pretending that these mass shootings are an inevitable horror we have to experience on a regular basis.”

Notice how the buzzword the gun-controllers are using is “commonsense.” And what he wrote is called “prevaricating with statistics.” Gun deaths dropped everywhere in America the past three decades, except the past two years when police “pulled back” after the George Floyd riots of the summer of 2020.

As the following chart shows, as recently as 2019 the numbers were lower even than that. And even as gun laws were liberalized in the 1990s, especially allowing conceal-carry in most states, gun murders went down sharply.

Moreover, California gun laws have zero effect on criminals who easily can get guns from the black market, or even legally in other states.

Newsom’s fellow Democrats in other states also won’t cooperate. They remember what happened after President Bill Clinton signed into law the 1994 “assault weapon” ban passed by the Democratic Congress: Democrats lost 54 House seats and control of that body for the first time in 40 years. Working-class, hunting Democrats in swing states—such as the Pennsylvania depicted in the movie “The Deer Hunter”—revolted and voted Republican.

I remember Clinton insisting he was “a hunter” and only wanted to control non-hunting weapons. Nobody believed him. He dropped the gun-control patter and, “triangulating” as the phrase had it, also cut taxes and reformed welfare, moving to the center to easily win re-election in 1996.

Democrats already are facing a wipeout this November—including, possibly, in many close seats in California. Inflation, the uncontrolled border, rising crime and an onrushing recession almost guarantee losing the House and Senate. If they use the Uvalde and other tragedies to push a radical gun-control agenda, the losses will be even bigger.

What’s needed after these shootings is sensible, bipartisan discussions of such issues as mental health, better securing schools and maybe even criticizing Hollywood for its ultra-violent productions. Of course, such discussions should avoid the government censorship Democrats now are threatening against conservative and Republican websites and news outlets.

If the victims’ loss is to have meaning, it must include lowering the volume of the national discourse and working for real solutions—while continuing to safeguard the Bill Rights, especially that essential guarantee of all our liberties, the Second Amendment “right of the people to keep and bear arms.” If we are not free as Americans, then nothing else matters.